The Preachers in the Woodshed

I told one of my sons that the band was woodshedding yesterday, and he wondered what in the heck that meant.

We were practicing, of course.  Here's a photo of the Preachers' woodshed, a small practice room located at Metropolitan Music in Seattle's Maple Leaf neighborhood.  I was just leaving and the Machete hadn't showed up yet with his snare drum. 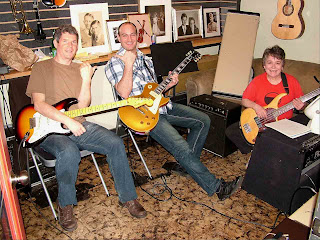 We worked on several originals, including "The Boneyard Preacher," Hard To Kill," "Spooky Kate," and a Pee Wee Crayton tune by the name of  "Do Unto Others."

I had to leave early so that I could take the Dynamic Duo and some of their friends to a skating party.  They turn 15 years-old tomorrow.  Time is flying by, my friends.

Our next gig is at the Yuppie Tavern in Kirkland.  It will be our first time at this venue, so we hope to see you there.

You can check out the Preachers here.  See you at the nightclub!
Posted by Mike Lynch at 8:38 AM No comments:

I dropped in at the Salmon Bay Eagles last night to see the guitar showcase hosted by the Eagles and Chris Stevens' Surf Monkeys.

The show featured the Surf Monkeys (Mark Dalton on bass and Russ Kammerer on drums) backing up guitarists Chris Stevens, Rod Cook, and the Preachers guitarist Tim Sherman.  I was invited by Tim to sing a couple of tunes during his set, and split shortly afterwards, so I only caught two sets of music.

One tune that stood out to my ears was the Surf Monkeys' version of "Spoonful" that featured a haunting slide solo by Rod Cook. The enthusiastic crowd was treated to plenty of surf and blues instrumentals also.

Here are a couple of photos from the show for y'all: 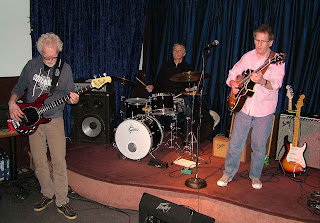 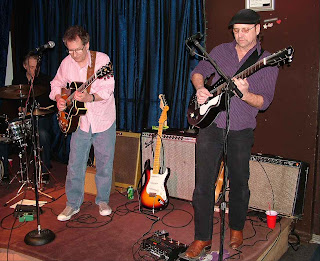 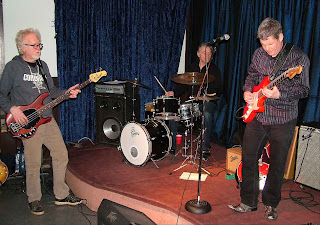 Tim Sherman with the Surf Monkeys.

You can check out the Boneyard Preachers here.  See you at the nightclub!
Posted by Mike Lynch at 12:24 PM No comments:

In our last episode regarding my new reissue Bassman, I mentioned that I was going to recone a quartet of CTS alnico speakers and try them out in the amp.

So, had the speakers reconed by Seattle's Around the Sound speaker reconing service.  Carsell, the owner, thinks that the speakers are actually Oxfords, not CTS, even though they look just like the CTS speakers.  However, the CTS speakers usually have a manufacturer's code stamped on the frame, and these speakers do not.  There are square blue Fender labels on the magnets, and a couple of these labels show a Fender part number of 064121 which indicates an Oxford speaker.  These speakers have 1.5" voice coils, are rated at 25 watts power handling, and were probably installed by Fender in their Super Reverb or Vibrolux Reverb amps in the early '70s.

After I picked up the reconed speakers, I installed them in the Bassman (a pain in the arse, by the way - the amp has to be removed to get the upper speakers out) and tried them out at a gig that night.  I didn't like them at all - they had a compressed, middy tone that I found uninteresting, so it's back to the reissue Jensen P10Rs for now. 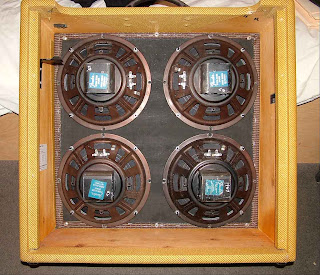 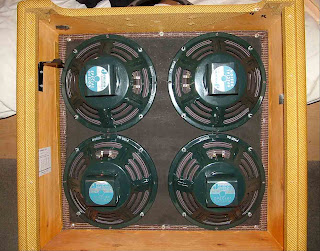 The Jensens are too bright and crunchy to my ears, but I'll have to live with them for a while.  I believe that I will end up installing new Weber P10R clones in this amp.  More expensive, but I'm pretty confident that they will sound great. So... 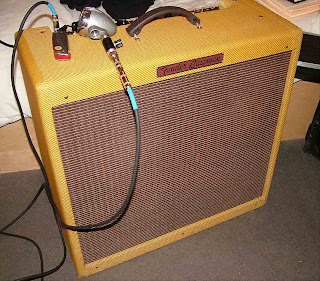 You can check out the Boneyard Preachers here.  See you at the nightclub!
Posted by Mike Lynch at 11:35 AM No comments:

This just in from our pal Bill Rhoades in Portland: 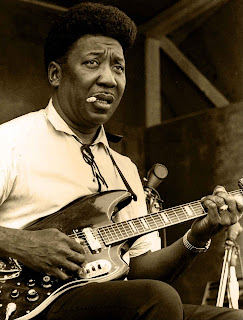 April 5, 2013 will be a special day for blues fans here in the Northwest. On this date at Duff's Garage we'll be celebrating the birthday of Muddy Waters - the King of the Chicago Blues!


Some of the finest blues musicians from the Pacific Northwest will be combining on this night for a celebration of the great bluesman Muddy Waters and his influence on any and all who play blues music!

Our special guest from Santa Barbara, CA. will be the the fantastic French/American Bluesman Franck "Paris Slim" Goldwasser.  Franck is a guitar player and vocalist extraordinaire, who honed his chops in the infamous Eli's Mile High Club house band in Oakland, CA for well over 15 years. Franck will be playing both solo and in a band setting at the show.

From here in Portland will be a man well versed in Muddy's songs and style - Alan Hager! Over the years Muddy's songs have been a staple of Alan's live shows and set list. Alan will also be playing solo and with the band and stinging that slide guitar!

Blues pianist and vocalist D.K. Stewart is on the bill and will have his Otis Spann/Big Maceo licks ready to burn. A perfect compliment to any Muddy Waters' songs were his great piano men and D.K. fits right into that 88 keys spot!

Two harmonica men who were greatly influenced by Muddy Waters and his fantastic harpmen will be blowing the blues at this show. Bill Rhoades and Jim Wallace (2012 Muddy Award winner - Best Harmonica) grew up hearing Muddy's tunes with Little Walter,
Big Walter Horton, Junior Wells, James Cotton, George "Harmonica" Smith and others, writing the book on how to play blues harmonica while backing up Muddy on his tunes. They'll bring their own Northwest roots and styles to this show!

Another blues guitar giant on the bill is Portland favorite Lloyd Jones! On this night Lloyd has his own Muddy Waters bag of tricks, both solo and band wise. Lloyd has been playing Muddy's tunes since his introduction to blues - many years ago! Solid stuff!

And no blues band would be complete without a dynamite rhythm section. Don Campbell is well acquainted with the Willie Dixon school of bass and a veteran of many Northwest blues bands! And back to the USA from the Netherlands is percussion expert Boyd Small.
Boyd has been a sought after drummer here in the Northwest for many years and over the last decade has been woodshedding with the Dutch blues players. Great chops and vocals!

One thing that Muddy Waters did in all of his fine groups was to let his sidemen step out front and do their thing! That's what will be happening on this show, with all the artists playing their favorite Muddy tunes and paying tribute to one of the greatest bluesmen who ever lived. A happy birthday celebration to Muddy Waters!


See you at the nightclub, kids!

You can check out the Boneyard Preachers here.
Posted by Mike Lynch at 7:30 PM No comments:

Portland Mojo - How Stumptown Got the Blues

I watched this documentary about the Portland/Eugene, Oregon blues scene this last Friday with my friend Nick Carnavalli while imbibing a couple of glasses of Wild Turkey. 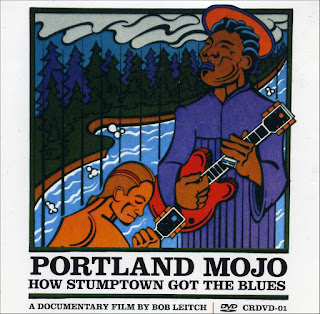 This is a very interesting flick.  It investigates why so many talented blues acts such as Lloyd Jones, Paul deLay, Robert Cray, Curtis Salgado, D.K. Stewart, and many other artists flourished in this area, and how the roots of the blues scene in the area began and developed.

A must see for Northwest blues fans!  You can order it online from our friends at Criminal Records.  Tell 'em the Plow...er, Playboy sent ya!

You can check out the Boneyard Preachers here.
Posted by Mike Lynch at 7:18 PM No comments:

I never have, but I guess it can happen at several clubs in Seattle.  The Preachers always play for a set fee, and rarely perform in a club where a cover charge is being collected any more.  Only a couple of the clubs we play in provide PA gear (let alone a soundman) so we are usually dragging a PA system around with us up and down the I-5 corridor.

I recall dropping in on some friends' blues band that was playing at a club in the Fremont neighborhood a couple of years ago.  They were the third (and final band) band to play that night.  I paid a $5.00 cover to get in.  This club provided a full pro PA system and soundman.  The soundman and doorman were paid a guaranteed amount, which was deducted from what was collected at the door before the bands were paid.

My pals' share of the evenings take?  Twenty dollars, or four dollars apiece - about the price of a double tall mocha at a Seattle coffee shop.  Yikes!!

Look here for an interesting blog post by Seattle drummer and instructor Tarik Abouzied about the economy that underlies the Seattle music scene.  Be sure to check out the readers' comments, some are quite good.

The Preachers are rehearsing today.  See you at the nightclub!

You can check out the Boneyard Preachers here.
Posted by Mike Lynch at 10:57 AM 1 comment:

A new release from Criminal Records.

This just in from our friends at Criminal Records - a new CD featuring several Portland artists, some still with us, some gone.  Looks interesting! 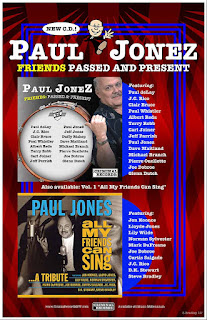 You can order from Criminal Records online here, or give them a call at 503-995-0115.  I just ordered the documentary "Portland Mojo - How Stumptown Got the Blues."  Looking forward to watching it!

You can check out the Boneyard Preachers here.
Posted by Mike Lynch at 8:07 AM No comments:

You should go to see this show.

Sheesh, this poster is kind of hard to read, ain't it?  Click on the image for a closer view.

Anyway, it's a show on March 23rd at the Salmon Bay Eagles  featuring Seattle guitarists Chris Stevens, Tim Sherman (Boneyard Preachers) and Rod Cook.  I assume that they will be backed up by the regular Surf Monkeys sidemen Mark Dalton (bass) and Russ Kammerer (drums).

The Eagles is a super friendly place with nuclear powered drinks, and a nice sounding room.  Note the low cover charge.  The club has been having pretty good luck with these special shows about once a quarter, so expect a decent turnout. 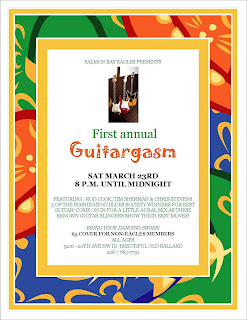 See you at the nightclub!
You can check out the Boneyard Preachers here.
Posted by Mike Lynch at 9:46 AM No comments: