Well kids, it’s time for another little story from the glory days of The Fremont Tavern & Blues Emporium. This one is about our friend and former sound man for The Owl Cafe's Blue Monday jam, that grumpy old Viking, Badger.

Now there are many wild tales about this guy. He was my sound man for a few years, and still is a good friend although I don't see him much these days (remind me to tell you about the fist fight before one of my gigs at the Owl, when Badger, Uncle Ray and I had to eject two very drunk, very large brothers (crab fishermen) from the club. That story will be included my Owl Cafe series).

Anyhow, were playing the Fremont as usual on a Halloween night. One of the many motorcycles curbed outside was Badger's root beer brown shovelhead. As my dear departed pal Elgin used to say, "You can't dig without a shovel!" (I'm a knucklehead man my self). In those days the Gypsy Joker club house was on Ashworth Avenue up in the Wallingford neighborhood. From time to time there would be a party going on up there, and people would ride their bikes between the clubhouse and the Fremont in this sort of freewheeling roundabout. 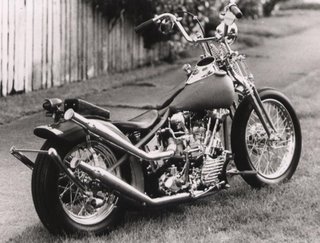 Brewer's knucklehead
So Badger headed up to the clubhouse for a change of scene and a quick putt. He didn't return for a few days. The following afternoon, in the police blotter section of the Ballard News Tribune, there appeared the story of Badgers ride. It went something like this:

The photo of David Brewer was taken at the Fremont Tavern in the early '80s (unknown photographer).
Posted by Mike Lynch at 10:07 PM 1 comment:

The Midnight Movers recently played a memorable gig at a bar located in a small town across the Sound from Seattle. We had played there one other time to a small but enthusiastic crowd, so we thought we would try it again. Besides, the owner had recently remodeled part of the place so that there was now an actual stage there, unlike our previous visit when we played underneath the stairs in a corner of the restaurant.

We arrived at the joint and set up. The new stage was a good size, but there were only two duplex electrical outlets and no stage lights (unless you count the three small lights that blinked off and on in a box on one of the back walls). A large neon beer light was thoughtfully installed next to the stage where it introduced a persistant 60-cycle hum into my PA speakers.

We played to about eight people during the first set, including the owner, who happens to be a big harmonica music nut ("I've been playing harp for 35 years, but not professionally"). After a few songs he began loudly suggesting that we "have a little fun" and have him join us on the stage to play harp. I don't know what came over me, but I invited him up with us.

I figured I should play a tune along with the Big Guy, so I asked Eric, one of our guitar players, to sing a song. Eric called off a song in the key of A. The Big Guy couldn't see the keys of his harps for some reason (Earth to Mike - WARNING! WARNING!), so he asked me to pick out an A harp for him. I figured that this meant that he was going to play in first position, so I told him that I would play in third position. This information did not seem to make much of an impression on him. I gave him my vocal mic to blow into.

Poor Eric started the song and our guest began producing a torrent of feedback by playing incorrectly into the vocal mic. No problem, he just kept playing anyway. I jumped offstage and turned the mic down. Our boy was playing up a storm, relentlessly producing many, many notes and broken chords, all in the wrong key, played in a sort of mangled cross harp (second) position.

When the song ended, he insisted that we play one in the key of C, because that was his favorite harp key. My mind went blank, I couldn't think of a tune in C. But I did know this - if I called a song in the key of C, he would actually be playing in the key of G (sort of). What the hell, I sang another song while he wailed away in the wrong key again. Have you ever tried to sing in tune under these circumstances? I don't recommend it. 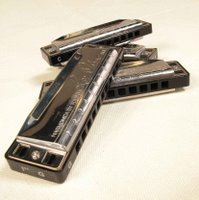 Oh yeah, the customers! The remaining few watched this...event with that "deer in the headlights" expression, then fled the scene of the crime before the set ended. Our guest artist wanted to "talk harps" with me on the break, but I chose to drink shots of Wild Turkey in the bar instead, while New Country and Metallica tunes blasted away on the stereo.
Posted by Mike Lynch at 10:30 PM 1 comment:

How the Spiderman got his name.

This is a true story. The names haven’t been changed because none of the people involved were or are innocent.

In the early 1980s I was invited to play for a New Years Eve party at one of the most notorious clubs, bar none, in the history of North Seattle lore, the Fremont Tavern. Just north of the Fremont bridge, it was a rough joint, but also home to some of the most interesting and colorful people around: artists, musicians, bikers, heartbreakers and home wreckers, free souls, drunks, derelicts, etc, etc. After that first gig I became the house band or the next three or four years, five nights a week for the first year and a half. 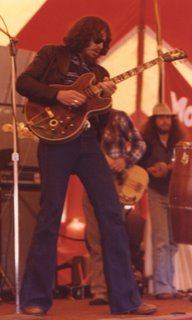 At that point the word was out that it was the blues club of the scene. My blues cohorts (such as Tom McFarland, T-Bone Fisher, and Mike Lynch) began to play there on a regular basis. A famous Blue Monday jam developed and it ended up being a seven day a week party. When it was closing time everyone would head next door to Colman Brown’s (from the band Septimus) after hours place called The Fun Hole.

Having a few days free to play elsewhere, I copped a Saturday night gig downtown at Larry's. The players in my band at the time were Dan Abernathy (guitar), Bill Majkut (bass), myself (guitar/vocals), and Kirk “KT” Tuttle (drums). After the show at Larry's came to a screeching halt, it was decided that the party would be at my place. At the time I had been living in an upstairs apartment on the corner of 85th and Greenwood Avenue for three years. So I, KT, Gypsy Joker Turtle John, several women (who shall remain anonymous), Badger, Dave Moore and a few others - armed, of course, with a trunk load of party favors and booze, began to saddle up and head to my apartment.

Now normally I would have ridden with KT, but this time I went with Badger because he was driving his newly acquired ‘47 Chevy, and I just had to check it out. So we had quite the caravan as we headed out to my place, including several bikes and KT in his lime green ‘65 Lincoln with the suicide doors. When we arrived, KT was mysteriously absent. The party ensued, and, after several hours still no KT. This was totally out of character, with KT being a prolific and hearty reveler and all. As the festivities wound down there came a faint knock at the door. Yep, he finally made it, looking disheveled, careworn, and pissed off to be sure.

Now it should be said that my apartment was old-school, with a locked front door and no buzzer. As it turned out, the Lincoln, as it was famous for doing, had vapor locked (if you don't know what that is, look it up, it's all about carburetion!) and needed to rest for a few minutes. After he got the car up and running, KT arrived shortly after the rest of us, but found himself locked out. With the party now in full swing, he was unable to get any one’s attention, so he began to look for alternative ways to enter the building, to no avail. In a final attempt, he began to scale the a drain pipe on the brick wall out back and made it up about 20 feet or so before falling to the pavement below, nearly breaking his back in the process. 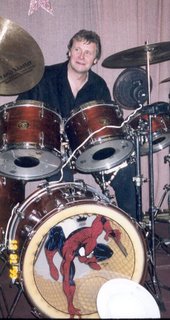 To his credit he finely made it to the party, but do to the injures he incurred he was unable to play our Thursday through Saturday gig that weekend backing up Bo Diddley at a club downtown called Under the Rail. He was not happy about this. After that I started calling him Spiderman for obvious reasons, and the name stuck. I painted a picture of said superhero on his bass drum head, and continued to do so on his birthday (in a new configurations of course), each year.

I can relate this sad tale because the Spiderman and I have been true friends over the past 25 years or so, and he has played the tubs for me for about nine years, off and on. He is one of the best. There are many harrowing stories about KT and all the rest of the cool and not so cool cats and kittens who made those days in Fremont so wonderful for me. Look for more adventures in Fremont tales to follow…and oblige.

Note: The David Brewer photo (photographer unknown) was taken in Seattle around 1976-77. The Spiderman photo was created by Ronda Lee.
Posted by Mike Lynch at 9:44 PM 3 comments: