Bo Diddley has been hospitalized with a stroke.

I got a call from my friend Don who played drums for Bo Diddley (left, back in the day) for years. He gave me the news that Bo had a stroke after playing a concert in Ohio last Sunday.

I played with him many times while I was touring with Albert Collins, most memorably a three-night stand when my band backed him at a place called the Under The Rail in downtown Seattle. He was really funny and a great player who everybody copied, from Buddy Holley to the Rolling Stones.

My father had a stroke three years ago and it finally took his life, so I know how debilitating they can be. I just wanted to make sure everybody in the Blues community says a prayer for him and remembers where the groove comes from.

Click here for more information on Bo Diddley's condition.
Posted by Mike Lynch at 7:54 AM 2 comments:

If you are harmonica player or simply a fan of harmonica music, you should go to the Highway 99 Blues Club this Thursday, May 17th, and see Jason Ricci & New Blood. Jason (left) has an amazing facility on the harp, unlike anyone that I've ever seen.

This band is constantly on the road playing dates all over the country, and recently signed a recording deal with Delta Groove Productions.

The music? Well it's sort of a mixture of blues, funk, and jam-band tunes, I guess. These guys give it their all, so be prepared for some long sets played with terrific intensity. I'll try to meet you down there!
Posted by Mike Lynch at 3:46 PM 1 comment:

This just in from David Brewer (below), just back from Atlanta and San Diego, and soon to leave for Europe again. 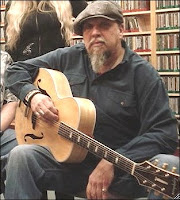 Well I'm back off the road for a minute, just long enough to wash clothes, do a Friday night show at the Eagles, then gone again.

My little solo shows went better than expected and I had a good time although I'm tired. Only one thing put the kibosh on my trip - the price of gas !!! Holy shit, I spent up all of what I'd planned to profit, but after all, it is the Blues !!!!

Just a couple of things I wanted to say: First off, I'd like to thank everyone who voted me in to the (WBS) Hall of Fame - I appreciate it. Also, I've heard a lot about the passing of Paul deLay, all much deserved, I must say. He'll be missed for sure.

I'd just like to give a tip of the hat to the late, great Cary Bell. I was sad to hear that he was gone. He was a blues giant, one of the Mississippi Godfathers. As some of you might know, he chose to cover one of my tunes ("Bad Habits") on his CD "Good Luck Man," and I was very proud that he would do it. There's another big hole in the blues because he is gone. Thanks for putting my song in the history books, Carey. Sail on, man, sail on....

I recently viewed the Stevie Ray Vaughan and Double Trouble "Live at the El Mocambo" DVD again. This was recorded in 1983, before Stevie Ray Vaughan added keyboard player Reese Wynans. The early Stevie Ray classics like "Pride and Joy," "Texas Flood," and "Love Struck Baby" are included. He also gives a nod to Jimi Hendrix with "Voodoo Chile" and "Third Stone From The Sun." There are twelve tunes in all.
Drummer Chris Layton said, “It was just a straight live performance, there just happened to be cameras there.” The cameras captured what I think is the finest example of blues/rock ever. Stevie Ray Vaughan plays behind his back and behind his neck with total soulful intensity and precision. This is Stevie Ray Vaughan at the heights of his powers. This footage was shot not long before his downfall with drugs and alcohol, his eventual redemption, and then his tragic death. Stevie Ray Vaughan was a true guitar giant. He is greatly missed.
If you get a chance, check out this DVD, I think you’ll dig it.

I first heard Aaron Neville at Seattle ’s Rainbow Tavern in 1977. The Neville Brothers were touring the country billed as The Neville Brothers and The Wild Tchoupitoulas with their uncle Chief George Landry. They were as funky and soulful as it gets. For the Wild Tchoupitoulas they wore the traditional Mardi Gras Indian head dress. It’s a show I will never forget. Aaron Neville sang his soul/R&B classic ballad "Tell It Like It Is" from the 60’s, which is one of the finest soul/R&B ballads ever. It was one hell of an evening.
I’ve seen The Neville Brothers many times since 1977, and Aaron has had great success with his family’s band and has had even greater success as a pop and easy listening artist. This CD, "Bring it on Home…the Soul Classics" brings Mr. Neville full circle, and back to the songs that I think have had a great influence on his unique style. The line-up of songs are:
1. The Brook Benton classic: "Rainy Night In Georgia."
2. "Ain’t No Sunshine" by Bill Withers.
3. Otis Redding’s "(Sittin’ on) The Dock Of The Bay."
4. Ben E. King’s "Stand By Me."
5. A big Aaron Neville influence, Sam Cooke’s "You Send Me."
6. The Staple Singers R&B/gospel classic, "Respect Yourself," featuring Mavis Staples.
7. Percy Sledge's, "When A Man Loves A Woman."
8. Al Green’s "Let’s Stay Together" with Chaka Khan.
9. Curtis Mayfield’s great tune "It’s All Right."
10. The great Curtis Mayfield again, "People Get Ready," featuring David Sanborn and Art Neville
11. The Temptation’s "My Girl" without the legendary guitar line that immediately identifies this incredible song.
12. Marvin Gaye’s "Ain’t That Peculiar."
13. What a way to end this soulful album-Sam Cooke’s "A Change is Gonna Come."
I think Aaron Neville sums it up, in a quote from the liner notes: “I love these songs, because they’re timeless. They’ll be passed from generation to generation till the end of time. Your mother can listen to them, and so can your grandchildren.”
I would like to thank my mother for this soulful gift. If you dig soul music and are a fan of great singing you’ll dig Aaron Neville’s latest work.
Allmusic.com

When I need to know more about a musician like Bobby Womack or Arthur Alexander I check out http://www.allmusic.com/ . This web site will give you biographies and discographies of every musical artist of any genre. Use the advanced search and find out all you need to know about your favorite singer or musician. This is a great resource for the true music fan.

Quote of the month:
When the late, great jazz saxophonist, Dexter Gordon, was asked what it took to be a jazz musician he replied, "If you can’t play the blues…you might as well hang it up." 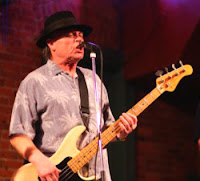 Electric bassist John "Mr. Solid" Lee was born in Alaska and has been active in the Seattle blues scene for about 30 years. He currently plays with the Crossroads Band. Photo by Mike Coyote.
Posted by Mike Lynch at 5:50 PM No comments:

This just in from Peter Dammann:

"Remember me..." A memorial concert celebrating the life, music and spirit of Paul deLay

Tickets are $20, and are available in advance through the Triple Door, or online at http://www.thetripledoor.net/. All funds raised will be used to defer the immediate family's medical and related expenses.

Open to all ages.

Paul deLay passed away on March 7 from complications due to late stage leukemia, diagnosed only days earlier. For more see John Foyston's piece in the Portland Oregonian:
http://www.oregonlive.com/entertainment/oregonian/index.ssf?/base/entertainment/1173327939191310.xml&coll=7
Posted by Mike Lynch at 9:43 AM No comments: 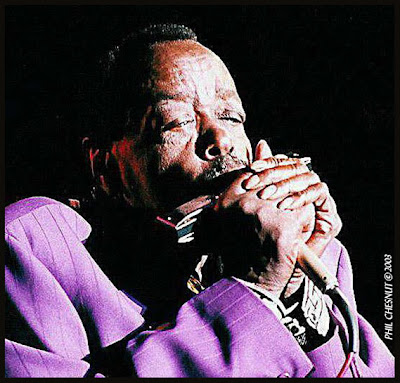 Note: The photo for this article was created by Phil Chesnut.

Full disclosure - I am currently doing the booking work for Kim Field & the Mighty Titans of Tone.

Long time Seattle blues harp player, singer, and songwriter Kim Field returned to the Northwest music scene with a bang last week at the Highway 99 Blues Club. His new band, Kim Field & the Mighty Titans of Tone, played smokin' sets of blues and R&B to a nearly full house of fans, on a Thursday "off" night. 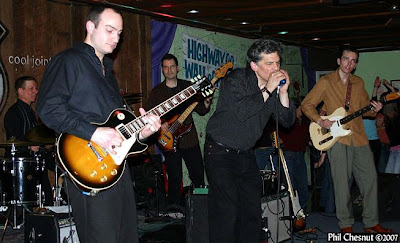 I knew that this band was going to sound good, but they sure surpassed my expectations, and those of plenty of other folks in the club too. The Titans have got a great lineup, including Steve "The Kid" Yonck and Eric Daw on guitars, Brady Millard-Kish on bass, and "Sweet" Billy Spaulding on drums. Eric and Billy also sing lead and backup vocals. Man, I don't remember the last time I saw three vocalists singing a tune in a Seattle blues band (mine included), but I sure enjoyed it. 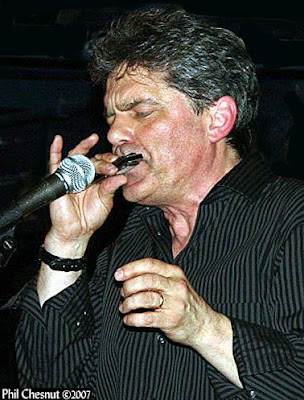 Lee Oskar, the former War harp player (Lee now plays with The Lowrider Band) who also lives in the Seattle/Bellevue area, showed up later in the evening and was invited up to play with the Titans. More great music was created as both Kim and Lee played on the stage together. This worked out better than some other times when I have seen Lee sit in at the Highway 99 - usually the band has to stop their show to play some funk for him, but this time he played along on the band's tunes and it worked out fine. 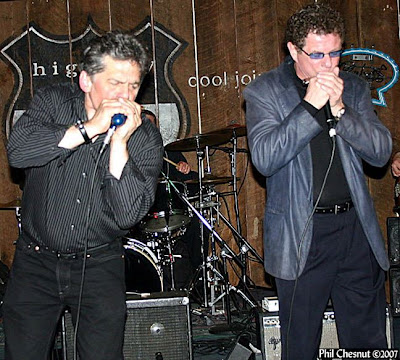 Good stuff! You need to check out this great new band at the local clubs, including the Highway 99 again on May 24th and June 28th. Or, you can check out their schedule on their web page.

Note: All photos that appear in this article were created by Phil Chesnut.

Ok, this issue has been brought up in passing here before, but I want to contribute my two cents before moving on to other subjects, like the forthcoming Isaac Scott blog.

The annual Washington Blues Society (WBS) BB Awards will be happening this weekend at the Triple Door in Seattle. Once again, Seattle tenor saxophonist Dennis Ellis has not been nominated for a BB Award. In fact, Dennis has never been nominated for a BB Award, in spite of being very active on the local blues music scene since 1988, first with the Guitar Slim (Pat Chase) Band for several years, and then with the various versions of the Crossroads Band, with whom he continues to play today.

I have been thinking about this because I have seen the Crossroads Band several times lately, and have really been impressed with Dennis' contributions to the group. He's a fine tenor (and flute) player, I dig his singing on the jump blues material that the band does, and he's got a great sense of humor. Plus, he's a sharp dresser, and goes to the trouble to utilize his wireless setup to wander into the crowd to entertain the fans. 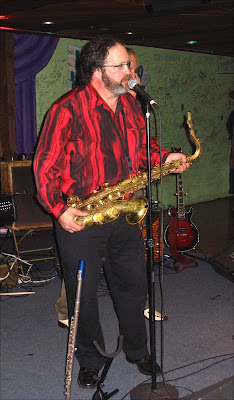 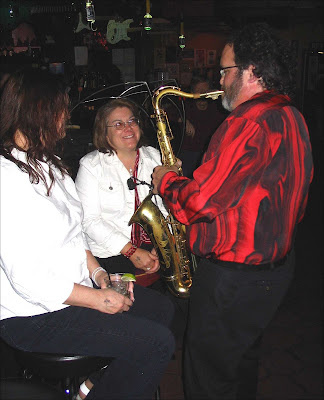 Entertaining the fans at the Highway 99 Blues Club

So what's not to like? Even Adam Gussow said recently that "...that sax player would make a great addition to any band..." during a visit to the Highway 99 Blues Club. I agree! I guess I'm going to have to rejoin the WBS and do my best to get Dennis nominated for the BB Award that I think he very much deserves in 2008.

Note to the WBS - it would be useful to characters like me to be able to look on the WBS web page and see the nominees and winners of the BB Awards over the years. Can someone make it so?