In the Pocket with Mr. Solid
By John Lee 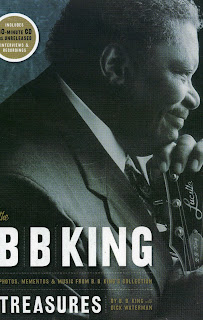 "The B.B. King Treasures - Photos, Mementos & Music from B.B. King’s Collection" by B.B. King with Dick Waterman
To celebrate his 80th birthday, B.B. King recruited the famed blues photographer and former manager, Dick Waterman, to help him put together a book that spans the complete life and career of the man most people know as “King of the Blues." Dick Waterman managed the likes of Muddy Waters, Son House, Paul Butterfield, and Bonnie Raitt. This truly unique and delightful book is a great work that gives the blues fan a great understanding of Riley B. King’s long and soulful rise to the top of the blues world.

"Treasures" has an introduction and a epilogue, but the bulk of the book is four parts: Part One - "Indianola Mississippi Seeds," Part Two - "Beale Street Blues Boy," Part Three - "Paying the Cost To Be the Boss," and Part Four - "Blues Is King." The story of B.B.’s life and career takes him from the cotton fields of Mississippi , to his education on Memphis’ Beale Street, his arrival at America ’s mainstream, and then blues ambassador to the world.
This outstanding book also includes 12 removable artifacts and a 60 minute CD. The artifacts are recreations of posters, backstage passes, and tickets, etc. from different times in B.B.’s life and musical career. The CD is comprised of some unreleased musical selections and audio interviews spanning the years. One of the interviews is conducted by Seattle ’s own world class blues photographer, Jef Jaisun, in January of 1970 when Jef worked for the “underground” newspaper The Berkeley Barb. Good stuff!

I highly recommend "B.B King- Treasures" and, along with “Blues All Around Me,” the autobiography of B.B. King, co-written with David Ritz, you will be in the know about all things B.B. I’m sure you’ll dig it!

As I thought more about the history of recorded music in America and the important record labels of blues, R&B, and Soul, I figured a list of the top ten wasn’t enough. Here are a few more I think need to be mentioned, starting with the two record labels I had mentioned at the end of the last “In the Pocket” piece, Mercury and Okeh.
Here goes:

11. Mercury Records in Chicago Illinois . This label began as a pop recording company featuring the likes of Frankie Laine, Vic Damone, and Patti Page. This fine label had a large catalogue of superb jazz sides, and some top flight blues and R&B also! Two of their top artists on the R&B and blues side of things were Eddie “Cleanhead” Vinson and Dinah Washington. They also recorded excellent sides for Johnny Otis and his Orchestra, Big Bill Broonzy, “St. Louis” Jimmy Oden, “ Memphis” Slim, and Sunnyland Slim to name a few. Seattle ’s own Ernestine Anderson also made some fine tunes for Mercury. For a good overview check out the 8 CD boxed set “The Mercury Blues and Rhythm Story." This stuff swings with the best!

12. Okeh Records founded in 1916 by a German named Otto Heinemann, recorded what many say is the first recorded blues tune, “Crazy Blues” by Mamie Smith in 1920. Okeh pressed early sides in the 40’s with the likes of Louis Armstrong, King Oliver and Duke Ellington to name a few. For many years the label recorded numerous sides featuring America's multiple nationalities like Greek, Polish, German, Italian, etc. The label began in New York City , then opened shop in Chicago also.
The label's talent scouts did a lot of traveling to record different artists in cities like Baltimore and New Orleans . From the R&B side of things, Okeh recorded some of the toughest honkin’ rhythm and blues around. Joe Williams (who later would become well known singing big band blues with Count Basie), Big Maybelle, Paul Gayten, Chuck Willis, Annie Laurie, Titus Turner, The Treniers, and “Screamin’ Jay Hawkins were some of the artists to make records for Okeh. Screamin’ Jay had the monster hit “I Put a Spell on You” for Okeh. I really dig a very obscure group that recorded for Okeh, Chris Powell and The Five Blue Flames. Check out the three disc set, "The Okeh Rhythm & Blues Story 1949-1957." This stuff is very, very cool. It’s a stone groove!

13. Cobra Records in Chicago , Illinois . Buddy Guy, Otis Rush, and Magic Sam made their first recordings for Cobra. I believe these sides helped define the modern blues guitar style. Led by the songwriting, arranging, and the playing of Willie Dixon, Cobra made some truly great recordings of blues and R&B from 1956 to 1958. Walter “Shakey” Horton, Sunnyland Slim, and Ike Turner’s Kings of Rhythm were some of the artists that made some very hip sides for Cobra. Check out the two CD boxed set: "The Cobra Records Story- Chicago Rock and Blues: 1956-1958." Short lived, but oh so nice!
14. Fire/Fury Records
, New York City operated out of a Harlem record store by Bobby Robinson. Fire/Fury recorded some mighty fine sides with the likes Lightnin’ Hopkins, Elmore James (probably Elmore’s finest efforts), King Curtis, Bobby Marchan and Lee Dorsey from New Orleans, also Buster Brown and Titus Turner are some of the cool artists that made fine sides for this powerhouse small label. Wilbert Harrison recorded the R&B classic, “ Kansas City ” for Fire. Gladys Knight cut “Every Beat of My Heart”, written by Johnny Otis for Fire/Fury records before her super stardom with Motown Records. Check out the two CD boxed set: "The Fire/Fury Records Story." Great sounds!

16. Duke Records. The record label was formed in Memphis Tennessee in the year of our Lord 1952 by David J. Mathis and Bill Fitzgerald. In August 1952 nightclub owner, record store operator, talent manager, and Peacock Record label owner Don Robey bought Duke and by 1953 he moved the full operation to Houston ,Texas and the label became known as Duke/Peacock Records.
Don Robey’s Peacock label had a roster of Clarence “Gatemouth” Brown, Memphis Slim, Floyd Dixon and Willie Mae “Big Mama” Thornton (whose song on Peacock, "Hound Dog," would soon be covered by Elvis). Peacock also had a top-notch roster of gospel artists including The Dixie Hummingbirds and The Mighty Clouds of Joy. Duke’s top acts at the time of the merger were Johnny Ace and Roscoe Gordon. In the 1960’s Duke made excellent recordings by Bobby “Blue” Bland and Junior Parker. May 23rd, 1973 Don Robey sold Duke/Peacock records to ABC-Dunhill. Mr. Robey stayed on as a consultant with ABC until his death June 16, 1975.

17. Excello Records in Nashville, Tennessee. Even though Excello was in country music’s capitol of Nashville , Excello was the home of the swamp blues of 1950’s and 1960’s Louisiana . Slim Harpo, Lightnin’ Slim, Lazy Lester, Lonesome Sundown, Silas Hogan, and Arthur Gunter all recorded for Excello. The Rolling Stones covered Slim Harpo’s “I’am a King Bee”. A very cool label for sure.

19. Malaco Records - Jackson, Mississippi . Started in the 1970’s to help promote true soul music, Malaco over the last three and half decades has had a roster of recording artists that reads like a who’s who of black American music in the last part of the twentieth century! Bobby Bland, Latimore, Z.Z. Hill, Dorothy Moore, Tyrone Davis, King Floyd, Little Milton, Denise LaSalle, Shirley Brown and the great Johnny Taylor are some of the cool artists to have come thru Malaco. This label has single handedly kept soul and soul-blues alive to this day. Hats off to southern soul! Check out the Malaco Records six disc boxed set: "The Last Soul Company-A 30 Year Retrospective." Shake it on down!

The top ten list turned into a list of nineteen! The more I thought about it and the more research I did, the list just kept growing. I think this final list is a pretty good summary. If anyone has any additions please let me know and I will give mention at a future date. 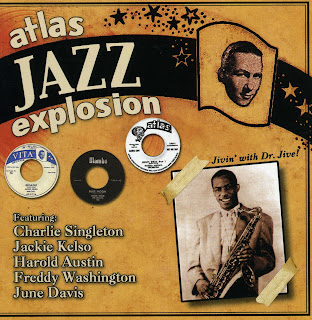 For my birthday in 2007 my good friend Charlene Grant gave me a fabulous CD of honkin’ saxophone driven sides from the Atlas Record label, titled "Atlas Jazz Explosion." The liner notes begin by saying, "During the 1950’s the boundary between Jazz and Rhythm and Blues was sometimes a blurry one." A large portion of this compilation is two saxophonists, Jackie Kelso and Charlie Singleton. Jackie Kelso was a member of Roy Milton’s Solid Senders and The Johnny Otis Band does eleven tunes to start the CD. Charlie Singleton closes out the CD with nine numbers.
In between are three tunes by pianist Freddy Washington, featuring two with vocalist June Davis. Two numbers are from drummer Harold Austin and band, including "Jesse’s Idea Part 1" and "Jesse’s Idea Part 2." This is a very cool set of tunes by an obscure but a very proficient group of players. If you dig either swing jazz or honkin’ R&B, I thing you’ll dig "Atlas Jazz Explosion"!

Mavis Staples is legendary for her vocal work with her family group, The Staple Singers, crossing over from the gospel world to garner hits on the top 40 charts in the 1970’s on Stax Records. "We’ll Never Turn Back" is stone gospel music done in a roots style, very much like the recent recordings by The Blind Boys of Alabama. This very fine CD begins with bluesman J.B. Lenoir’s haunting “Down in Mississippi ." It also includes the traditional songs “We Shall Not Be Moved”, “This Little Light of Mine” and “Jesus Is on The Main Line.” There are twelve tunes in all.
Ry Cooder leads an excellent group of musicians, including the fine drumming of Jim Keltner for this soulful recording. Mr. Cooder also was the producer for this spirit-filled venture. If you dig The Staple Singers or traditional gospel music, I’am sure you’ll dig Mavis Staples latest album. I won this cool CD in a random drawing from the very hip internet radio station http://www.allmemphismusic.com/.
Posted by Mike Lynch at 11:39 PM No comments: