Sometime back in the mid-'80s I joined the David Brewer Band for a gig at the clubhouse of a well-known one-percenter motorcycle club in Salem, OR.  The band included myself on harp, David on guitar, drummer Kirk "KT" Tuttle, and Abu Nafee on bass.  Abu normally played guitar and slide guitar in David's band, and I don't recall why he was playing bass on this particular gig.

The four of us met at the old Fremont Tavern that afternoon, loaded our gear into a small rented trailer, and split for Salem in KT's suicide door Lincoln Continental.   Things were going fine until the Lincoln's engine started running badly enough for us to have to stop several times by the side of the road.  After cooling off for a while it would start up again, but the problem continued until KT discovered the fuel filter was clogged.  After removing the debris from the filter, we were on our way.

We arrived in Salem many hours late, but set up and played anyway.  We probably would have played the whole night except that Abu, who had not been ingesting any of the abundant party favors, announced that that was it, he wasn't playing any more!  And not another bass note was played.

The rest of the night is a blur, but at some point, I recall unrolling my sleeping bag on a couch in the clubhouse and making a futile attempt to sleep.  After a few minutes, I heard this faintly familiar (and for some reason, ominous) rattling sound.  I peeked out of the bag and saw a leering club member getting ready to spray paint the sleeping bag.  Okay, I got it - no sleeping during parties at the clubhouse!

Later the next morning we pulled ourselves together and started packing our stuff up for the trip home.  One problem - Abu and his bass guitar had disappeared.  His amp was still there, but he was nowhere to be seen.  We searched the premises and the neighborhood, but no Abu.  Bleary and tired, the remnants of the band headed back to Seattle.

It turned out that Abu, fed up with the shenanigans at the gig and its aftermath, had somehow got himself to the Salem Greyhound bus station in the middle of the night and went home.  He actually arrived in Seattle before the rest of us. 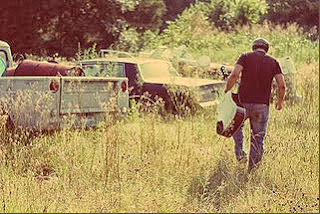 I should say that, when I talked to Mr. Brewer about this gig he said that he didn't see anything "weird" about it.  It was just like all of his other gigs, except for, you know, the disappearing bass player part.

You can check out the Boneyard Preachers here.  See you at the nightclub!
Posted by Mike Lynch at 11:42 AM No comments:

Patty Mey Update and the Bite of Broadview Show

Patty Mey attended the Preachers' rehearsal last week and two gigs this weekend.  She did a fine job, and didn't seem to be having any problems associated with her recent stroke difficulties. This is good!

However, notice that she is wearing a medical boot in the photo below, taken at the last rehearsal.  She broke a bone in her foot when she went to the hospital (before the stroke) for severe back pain a few weeks ago.  It should take six to eight weeks for that to heal now.  When it rains, it pours, amiright? 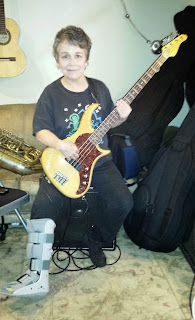 Also, today the Preachers played at a small outdoor community festival called the Bite of Broadview in north Seattle.  The weather forecast called for heavy rain and 35+ mph winds today, and that is just what happened.  The band that was scheduled to play before us bailed on the gig, since they apparently weren't getting paid anyway.  Sensible folks!

We were schedule to play a 90 minute set, and made it most of the way through, but we finally quit about 20 minutes early.  At that point, I had covered my amp with my coat to keep water out that was making it through the overhead canopy.  And you know what?  Monitors covered with plastic sheeting don't sound very good. 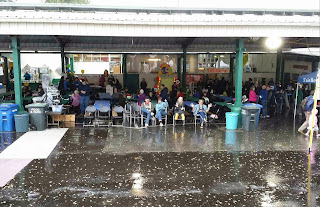 The view from the Bite of Broadway stage.  I see you, Lauri!

After the gig, Lauri, the Dynamic Duo, and I repaired to Nick's Off Market restaurant (we like this place - try the rosemary lemonade) for a late lunch.  While we were there, the neighborhood was engulfed by a torrential rainstorm accompanied by very high winds.  We felt sorry for any bands that were still attempting to play at the Broadview festival, located not too far away.

You can check out the Boneyard Preachers here.  See you at the nightclub!
Posted by Mike Lynch at 12:53 AM No comments:

I chatted briefly with the Preachers' bassist Patty Mey today, and she gave me this health update:

She still has numbness on her left side, but other than that, doesn't feel too bad.  Her neurologist examined her this week and told her that she is recovering normally, and that it could take a couple of more months before the numbness subsides.

Patty played at a jam session downtown last week and didn't have any physical difficulties, but she was more tired afterwards than usual.  She will be attending the Preachers' rehearsal next weekend, so we will provide another update afterwards.

Patty said to say thanks to everybody for the kind thoughts.  Keep 'em coming! 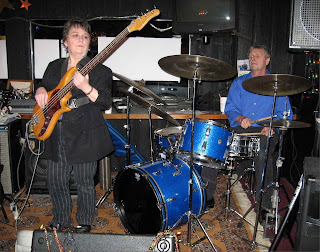 Patty and KT (RIP) playing at the Corner Inn in West Seattle many moons ago.

You can check out the Boneyard Preachers here.  See you at the nightclub!
Posted by Mike Lynch at 1:59 PM No comments:

I have played at casinos only twice: the first was a sparsely attended afternoon gig in Marysville with Becki Sue & Her Big Rockin' Daddies, and the second was this weird gig that occurred at a casino in Shelton a few years ago.

On the appointed day, an abbreviated version of the Midnight Movers (myself, bassist Patty Mey, drummer Kirk Tuttle, and guitarist Steve Yonck) headed out to Shelton, a small town about a 90 minute drive from Seattle.

We were instructed to check in with the casino security types upon arrival.  They told us to go around to the back of the facility to the kitchen where we could unload our equipment.  We then hauled our stuff through the kitchen and down a labyrinth of hallways to the lounge where we were to perform.  The bar was full of folks taking a break from gambling, but there didn't appear to be a stage for the band.

A closer look revealed that there was a stage alright, but it was located immediately above the area where the bartenders were working.  To get to the stage, we had to pull down this hidden trap door with attached stairs located in the ceiling of the hallway behind the bar.  Each piece of our gear had to be wrestled up this contraption one at a time to the tiny stage.  All of the instrument cases had to be brought back down and carried back out to our cars, which then had to be relocated to a parking lot far, far away.

The floor of the stage at this place was about 12 inches above the bottles of booze that the bartenders were serving from.  There was no safety rail around the space, so when Steve accidently bumped into my music stand it went over the side and almost brained one of the bartenders.  Also, since we were so close to the bartenders, we had to play very quietly so  that the staff could communicate with each other. 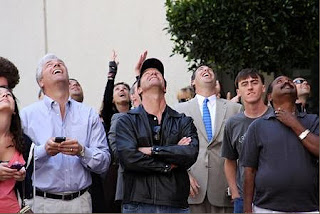 I practically had a mutiny on my hands when the bar manager told us that since we were considered casino employees for the duration of the gig, drinking alcohol was not allowed!  Whatever, we made it through the gig with a minimum amount of complaining from the staff, and total disinterest on the part of the customers.  There was a large roll up screen located above the "stage."  It seemed to me that the event would have been equally successful if they showed a sports event on the screen while we played behind it.  I'm just sayin'...

You can check out the Boneyard Preachers here.  See you at the nightclub!

Fellow musicians - Do you have a Weird Gig story that the Jet City Blues readers might enjoy?  If so, let me know!
Posted by Mike Lynch at 10:51 AM 5 comments:

I dropped in at the Salmon Bay Eagles club last night and caught a few minutes of a rare set of David Brewer music.  No Intimidators backing him up this night - just David singing and picking his recently refurbished Gibson ES-345 guitar through an Acme amp, accompanied by bassist Charles Mack.

It took me back to the old Fremont Tavern days 20+ years ago, but, you know, not as loud!  As a matter of fact, several of the denizens of that long gone dive were in attendance to hear David play again, including long time Brewer Band bassist Bill Freckleton..

I could only stay a little while, but did manage to get a couple of photos: 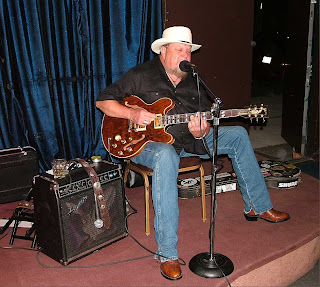 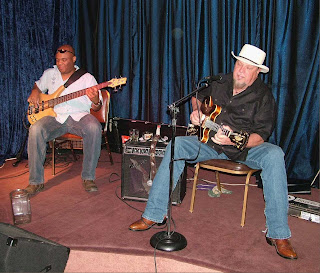 You can check out the Boneyard Preachers here.  See you at the nightclub!
Posted by Mike Lynch at 7:56 PM 1 comment:

Long time Seattle and Boneyard Preacher bassist Patty Mey suffered an apparent minor stroke late last week.  She was experiencing a severe headache and numbness on her left side when she went to the emergency room.

Patty is back home after a couple of days in the hospital, but is tired and still experiencing the numbness on her left side.  Her doctors say that, barring further complications, she should recover fully in six to eight weeks.

We will keep you posted here on Patty's healing progress. 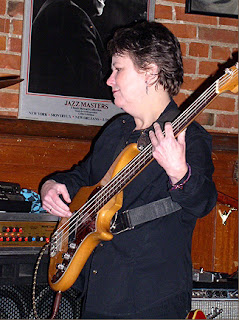 Here's the latest about a couple of interesting gigs the Preachers played towards the end of August.

On the 17th, we played a gig for the Northwest Dance Network at the Oddfellows Hall in Seattle's Ballard neighborhood.  The Northwest Dance network is a non-profit organization that promotes social dancing events in Seattle plus dance education classes.

We played in the second floor hall, so it was pretty warm up there.  However, there was a pretty good turnout and the attendees seemed to enjoy dancing to the Preachers music.  Some things that we were asked to remember: don't play too loud, mix up the beats, and try to keep the songs about three to four minutes in length.  We hope to be invited back again soon.

Oh yes, a special shout out goes to Lauri for recommending us to the Network.  Who loves ya, baby?!

I brought my camera, but totally forgot about it.  However, Lauri did capture this photo of Steve doing his God of Hellfire routine on the stage just before we went home. 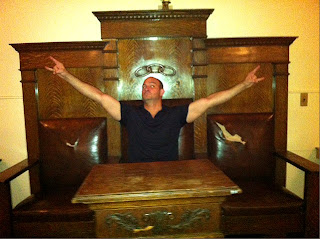 Run away, run away!

On the 24th, we played a Toys for Tots benefit outdoors at the Eagle Haven Winery in little ol' Sedro Woolley.  One of the organizer saw the band play last year and invited us to participate in this event.

We played a one hour opening set for the event headliner, Leroy Bell & His Only Friends.  We were told to bring all of our equipment, but there really wasn't room on the stage for two drum kits and bass gear.  Fortunately, El Machete knew the other drummer and was able to use his kit.  The bass player wouldn't let anybody touch his rig so Patty had to go ahead and set up her gear on stage.

I don't know if we made much of an impression on the assembled well-off charity attendees, but we were paid and enjoyed free BBQ dinners, so it was all good. Here are some photos from the gig (all created by staff photographer Lauri Miller). 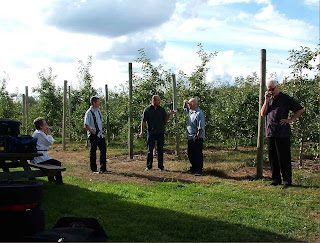 The Preachers taking a beak in the Green Room. 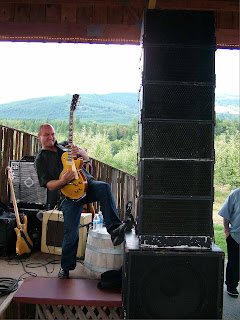 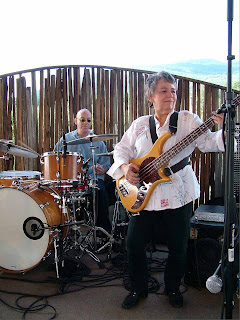 El Machete and the Mighty Mite.  Check out that giant kick drum. 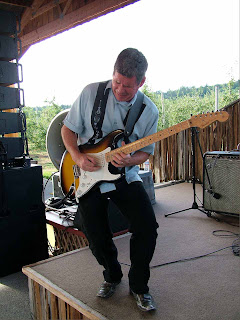 Stoop Down entertaining the masses. 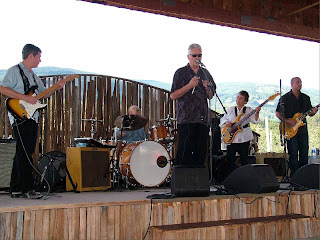 You can check out the Boneyard Preachers here.  See you at the nightclub!
Posted by Mike Lynch at 9:43 AM 1 comment: