Doug Royce is dead
I received a call from Seattle guitarist Jack Cook recently, who told me that Northwest native and bassist Doug Royce died in January 2009 in Fort Pierce, Florida.  Doug had been suffering from prostate cancer, and was 74 years old at the time of his death.

Veterans of the Seattle blues scene will remember that Doug, a trained jazz musician, played with the Hokum Blues Band, the Brian Butler Band, the Tom McFarland Band, and Nitelife.  Before moving to Seattle, he played jazz for years in Los Angeles and Las Vegas, including a period with the Ray Anthony Band.

I played with Doug in the Tom McFarland Band.  He used an unusual bass rig - a semi-hollow body ES-335 style Gibson bass that he played with a pick, plugged into a solid-state GK amp powering 2 x 15 Fender cabinet.  He told me that this setup sounded the most like the acoustic basses that he played for years.  I always wondered what happened to Doug after we quit playing with Tom.  He apparently moved to Florida to be near his daughter after his wife died in 2004. 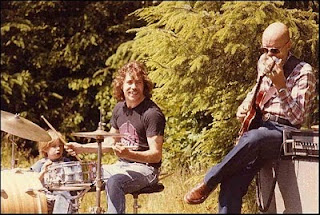 The late Ric Howell (left) and Doug  Royce - Ketchikan, AK (early '80s)
RIP
Thanks to Jack Cook and Mike Dumovich for their help in providing background information for this blog.  Unfortunately, this is the only photo that I have of Doug Royce.  If anyone has a better one, please let me know!
Posted by Mike Lynch at 10:08 PM No comments:

As mentioned in the previous blog, Greg Roberts and I played at the recent memorial for Foster Williams held at the new Orleans Creole Restaurant.  There was a pretty good turnout, and owner Gaye Anderson provided a nice spread of food for the guests.

A sizable group of the jazz musicians that have played at the New Orleans over the years played most of the afternoon, mostly New Orleans style jazz music.  I was thinking that those musicians and their fans wouldn't care too much for the Chicago style blues that Greg and I were going to play, but I was wrong! 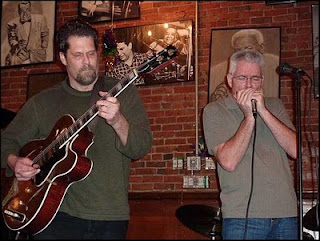 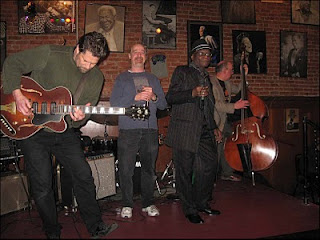