David Ritz is the author of the Marvin Gaye biography "Divided Soul: The Life of Marvin Gaye." Mr. Ritz made a big splash in 1978 when he wrote the “collaborative autobiography”, "Brother Ray" with Ray Charles. He Has also co-written books with Smokey Robinson, the great producer at Atlantic Records, Jerry Wexler, Etta James, B.B. King, Aretha Franklin, and the Neville Brothers. He has won the Ralph Gleason Music Book Award four times.

His works with Etta James, B.B. King, The Neville Brothers and Jerry Wexler were the winners of the Music Books Award top prize. These books are a great way to get true insight in to some of the greatest Rhythm and Blues artists of our time. Recently, he wrote the biography of the great singer, Jimmy Scott. Mister Ritz also wrote the lyrics to Marvin Gaye’s ” Sexual Healing”.

Check him out! I think you’ll dig his work!

My good friend, singer, songwriter and bassist Charlene Grant gave me a DVD of Robbie Laws’ Bigger Blues Band live at the Waterfront Blues Festival. Robbie Laws is a Portland, Oregon guitar man, but the Bigger Blues Band is Seattle all the way. A rhythm section of Charlene Grant on bass and Steve Sarkowsky on drums, Frank “Hot Rod” Holman on the Hammond B3, and a horn section of Mike West (saxophone), Mike Toule (trombone), and Greg Lyons (trumpet).

They did a fine job backing Robbie Laws. This is a nice set of seven tunes with the highlight being the O.V. Wright classic, “ I’d Rather Be Blind, Crippled and Crazy." The Bigger Blues Band will be backing Robbie Laws at The Highway 99 Blues Club in downtown Seattle , Saturday March 24th 2007.

My friend Roger Lindgren recently brought me a CD he picked up on the Legendary Rhythm and Blues Cruise - Joey Gilmore’s “The Ghosts Of Mississippi Meet the Gods of Africa”. This is a short (10 tunes) but great collection of funky and soulful blues. Highlights are the title track, the soul blues piece “Love to See You Smile,” and the mournful telling of the murder of the young black teenager from Chicago, Emmett Till in 1955 Mississippi, “Things Have Not Changed”.

I saw Joey Gilmore at The Arkansas Blues and Heritage Festival. If you get a chance to see him or pick up “The Ghosts Of Mississippi” CD, don’t hesitate. His web site is: www.joeygilmore.net.

Catch you on the rebound!

When the late, great, country blues musician Furry Lewis was rediscovered in the 1960’s and appeared on the Tonight Show, Furry told Johnny Carson, "Why should I marry when the man next door has a wife?" 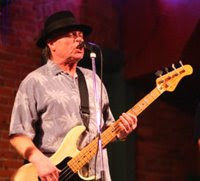 Electric bassist John "Mr. Solid" Lee was born in Alaska and has been active in the Seattle blues scene for about 30 years. He currently plays with the Crossroads Band. Photo by Mike Coyote.
Posted by Mike Lynch at 6:29 PM No comments: 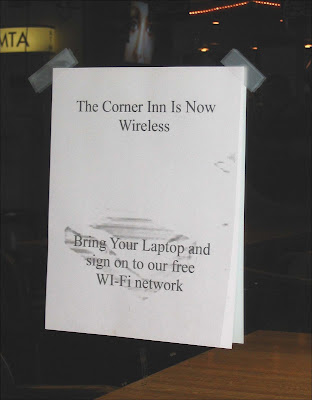 Some random shots for ya'll...

I was playing with Huckleberry Hound & the Double-Wides (yours truly on harp and vocals, John Stephan on guitar and vocals, Charlene Grant on bass and vocals, and Kirk "KT" Tuttle on drums) on a rare Saturday night gig at the Salmon Bay Eagles last month, when several friends showed up towards the end of the night. We got 'em up to jam, of course, and the resulting combo shown below sounded pretty damn good! Man, I haven't seen Brian Butler for ages. 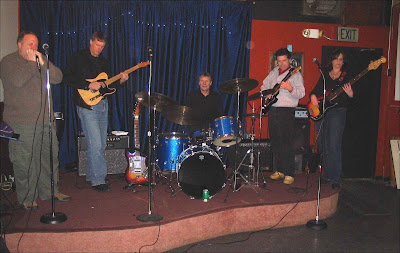 KT and I ran down to the Eagles again last Thursday to see a rare appearance by David Brewer (below) & the Intimidators. It was Ellen Harp's birthday, so there were some folks there for the party, plus several Brewer fans that I hadn't seen out and about for a while. 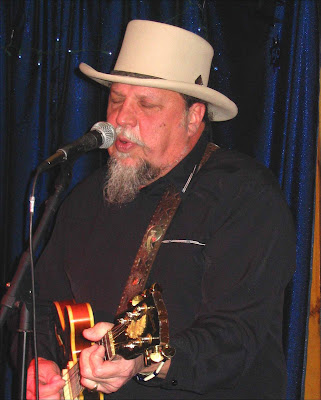 The Intimidators were sounding good! The band this evening featured long-time bassist Bill Freckleton, plus Ron "Deacon" Weinstein on Hammond B-3, and Chris Leighton on drums. David told me after the gig that, due to the medications he's taking for a heart condition, he wasn't feeling that great at the gig. I dunno - he sounded fine to me. 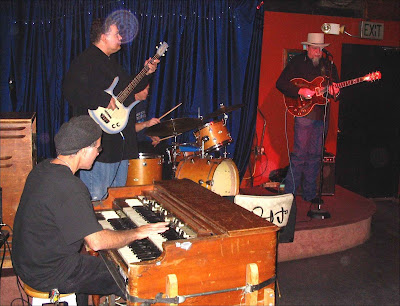 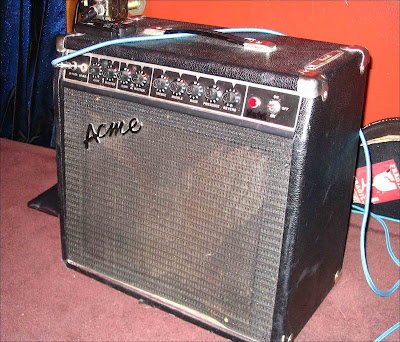 I had to take a photo of David's mysterious "Acme" brand guitar amplifier. So that's how he gets that supersonic sound...

Posted by Mike Lynch at 9:45 PM No comments:

The Phantoms of Soul

I visited Seattle's Maple Leaf neighborhood last week to see Jack Cook's Phantoms of Soul at the Maple Leaf Grill. It's been a long time since I've been in that neck of the woods, and I was surprised to see that the the Maple Leaf Grill is now located in a large renovated building that used to be someone's private home.

The Phantoms (Jack Cook -guitar/kazoo/vocals, Steve Branca - acoustic bass, David Hudson - drums, and Hugh Sutton - accordian) were playing on one side of the bar, located in a room that might have been the home's original living or dining room. This has got to be one of the smallest spaces allocated to a band in Seattle! Jack was playing guitar through a small Magnatone combo amp (that sounded great, by the way - otherworldly vibrato!) and David's drum kit consisted of a snare and what looked like a small trap case that he was using for a kick drum. 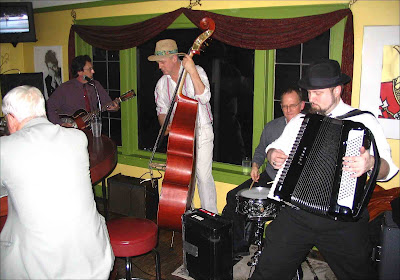 The Phantoms of Soul at the Maple Leaf Grill
I listened to the band while swilling a couple of rum and cokes with Rhea Rolfe, the President of the Washington Blues Society. Despite the cramped quarters, the band sounded fine playing Jack's original tunes and obscure roots and blues tunes, including my favorite, "Root Hog Or Die." All of the guys in the band are really fine players - I especially enjoy Jack's original angular guitar style and accomplished slide playing. 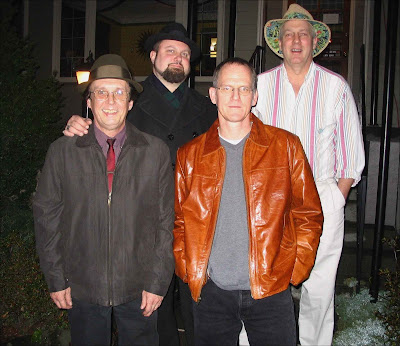 I had to split after about an hour, but I will try to get out to see the Phantoms again soon when I have more time to hang out. Check out the band's schedule on their web page. See you at the nightclub!