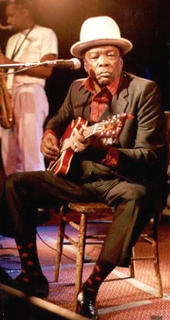 I'm reading this John Lee Hooker biography right now, titled Boogie Man - The Adventures of John Lee Hooker in the American Twentieth Century, by Charles Shaar Murray. A good read, I recommend it highly to any fans of the post-WWII blues genre.

The cool thing about Hooker is that, even though he was a peer of BB King, Elmore James, Muddy Waters, and the rest of the great '50 blues players, he didn't really sound like any of them. Perhaps it was because he ended up in Detroit instead of Chicago when he fled Mississippi? I dunno, but he sure left behind a lot of great music for us to enjoy (he died in 2001).

The first time I saw John Lee Hooker was in 1971 at the old Eagles Auditorium in downtown Seattle. I had just come home after three years in the Army. If I recall correctly, the band War (War's harp player, Lee Oskar, currently lives in the Seattle area) was backing him up that night for some reason, and they did a fine job, even inspiring several women to join the band on stage topless.

I saw Hooker two other times: once, around 1979, when my band Nitelife opened up for him and his Coast To Coast Blues Band at a joint in Bellingham, WA , and one other time at the great Jolly Roger Roadhouse in Seattle in the mid-'80s. The band that appeared with him at the Roadhouse was the lesser of the two, in my opinion. But, they were five times louder!

My favorite John Lee Hooker albums are Dimples (Vee Jay), Serves You Right To Suffer (Impulse), and Hooker 'n Heat (Liberty). The last album features Hooker backed up by the band Canned Heat. I just bought a copy of this CD, and it sounds just as good now as it did when it was first released in 1971.

Thanks for the tunes and inspiration, John!

Photo of the Hook by Ronda Lee.
Posted by Mike Lynch at 8:27 PM 2 comments: 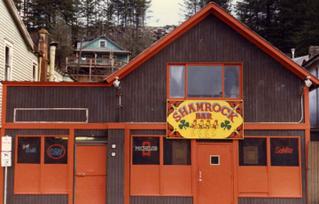 Our band Nitelife ended up in Ketchikan, Alaska on the recommendation of some friends in the band Earthquake and the Tremors (what ever happened to harp player Earthquake Anderson, anyway?). In the spring of 1980 we were hired to play for four weeks at the Fireside Restaurant, a very nice place downtown owned by a woman by the name of Punky. The Fireside gig was a good one; decent pay, free meals and booze, a terrific staff, and normal (9:00 PM-1:30 AM) hours. We played Tuesday through Saturday, usually to a half-filled house, although a party sometimes got itself worked up on the weekends.

It didn't take the band long to discover the Shamrock Bar & Supper Club, a crazy topless bar just on the fringe of downtown, maybe a 10 minute walk from the Fireside. The Shamrock was exactly the opposite of the Fireside - a tiny, dark bar with attached liquor store, wooden picnic-style tables securely nailed to the floor, not-so-fresh topless dancers imported from the Lower 48, and the latest Top 40 hits blasting relentlessly from a large jukebox. The denizens of the Shamrock included fishermen, loggers, dealers, johns, mental cases, fugitives, and the occasional lost Love Boat tourist. In other words, our kind of folks having fun! Hell, we figured, the only thing missing was a blues band.

The Shamrock was owned by a former deep-sea diver by the name of John C. John also claimed to have been a Navy Seal in Vietnam. Whatever else John was, he was one of Ketchikan's premier party boys, no doubt about it. He started coming to see Nitelife at the Fireside, dug the band, and hired us to play for two weeks at his joint as a trial run. The gig was six nights a week, from 10:00 PM to 3:00 AM. The bar's hours were from 8:00 AM to 5:00 AM, so there was plenty of time for interesting things to happen. Here's just a couple that I recall:

Can I buy the house a round?
Like most joints in Ketchikan, the Shamrock had a bell behind the bar that the bartender would ring when some nut wanted to buy a round for the house. On this occasion, our patron took a 9mm Browning Hi-Power out of his Helly Hanson rain coat and shot the bell, which caused the whole bar of deafened revelers to hit the deck like sacks of potatoes. This irritated the bartender no end, who then took the piece away from our boy and wouldn't give it back until the end of her shift, causing endless whining and sniveling from him for the next four hours.

Don't worry, it's only a flesh wound.
The aforementioned John C. would occasionally disappear for a couple of days for parts unknown. He showed up during the middle of one of our sets at the Shamrock after one of these trips, totally blasted, barefoot, and wearing a pair of bloody and torn khaki slacks. Turns out he had somehow accidentally shot himself while taking a leak at a bar on another island. But he didn't seem to be feeling any pain; in fact, just like Tony the Tiger, he seemed to be feeling GREAT! John insisted loudly that we play some Bo Diddley. So, as we played Bo's "Pretty Thing", John danced deliriously, barefoot, in a mess of broken highball glasses littering the floor from a previous altercation.

Happy birthday to....me!
The "bandstand" at the Shamrock was really just a small plywood platform about six inches high stuck in the back of the place next to an ice machine. One night, one of the customers crashed onto the stand while we were playing, hitting my mic stand on the way down and jamming an SM-57 into my right eye. That's OK, accidents happen, but when he collapsed on the stage a second time, almost poking my other eye out, we both ended up wrasslin' on the floor. Shortly, our bass player, Mr. Solid, and our drummer, the Varmint, joined us and the dancing fool was soon sitting on the sidewalk in the pouring rain. He immediately raced back into the club, and the whole procedure had to be repeated. It turned out that that night was his birthday, and after ingesting a large amount of hallucinogenics, he proceeded to go on a drinking spree at the downtown bars. The Shamrock was the fifth and final bar he was thrown out of.

How do you like me so far?
There were several memorable Shamrock regulars such as Roy Boy, the Pee Monster, Uncle ZebCo, Priscilla, and my favorite, Terrible Ted. Terrible Ted was a red headed, gnarly, foul-mouthed artist whose main mission in life once our band hit the Shamrock was to piss in our tip bucket, a feat he never quite succeeded at, fortunately. Ted's behavior finally became so unbearable to the good citizens of Ketchikan that a local judge finally ordered him to leave town for good. Terrible Ted financed his eventual trip to Anchorage (where I heard he was working as a college art professor) by selling shares of the "Get Rid Of Terrible Ted Fund" for five bucks a pop. I guess he had the money for his plane ticket in no time.

The Shamrock finally became too much even for John C. He hired a giant (6'8") topless bar manager named Hoss to run the place. The first thing Hoss did was paint the Shamrock orange, for cryin' out loud. This at a place where in the past, you could drink free all day and night on St. Patrick's day as long as you drank Irish whiskey (this is a whole other story, believe me). There were a couple of mysterious fires, and the 'Rock finally burned down for good a couple of years after Nightlife's third trip there. 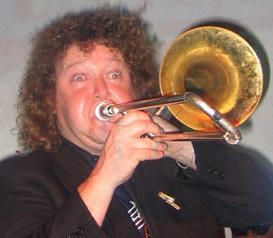 Email ThisBlogThis!Share to TwitterShare to FacebookShare to Pinterest
Labels: Blues News
Goodbye Blue Sunday - was it something I said?

So the Prez called me today to tell me that the Sunday blues jam session at the Chinese joint up in north Seattle is now on life support. The owner told him that he's going to hire Prez's band only from now on, and if the crowd doesn't increase dramatically in the next four weeks, he's pulling the plug.

Gee, what a surprise! Here's how Midnight Movers' only gig at this place went...

As usual, I arrived about one hour early in order to set up the PA system. As soon as I get out of my car this Asian guy walks up to me and tells me I've got to fill out the IRS W-9 form he's waving at me. He never introduced himself, but I assumed he was the owner. I filled out the form and gave it to the bartender, a tall, good looking gal that seemed to be wearing a piece of black shag carpeting for a top.

I quickly discovered that there were no stage lights. The stage was as dark as a bat cave. I asked the bar manager if she could help me out, and she produced a single light tree that was apparently removed from the karaoke room. The hard-wired controller for the four lights would either blink all of the lights in rapid succession, or blink them slowly. I chose the slow setting where a single light would come on for a few minutes then switch to a different light. One problem - several times during the night the yellow light wouldn't come on at all, so the band played in the dark until the next light blinked on. A nice effect that no one in the club seemed to notice.

Only three jammers showed up, including a really wretched drummer and bass player, plus one really good drummer (thank you Jesus!). Two blues fans that we knew hung around for a little while. The other 10 to 15 denizens of the deep that were there looked on listlessly.

Well, I've got to hand it to the owner - he did advertise the gig in the local Blues-To-Do newspaper. He even had our promo photo displayed in the hallway next to the Top 40 bands' photos (Femme Fatale played there before us). And we did get paid in cash.

But some gigs just have the smell of death on them, you know what I mean?
Posted by Mike Lynch at 5:45 PM 2 comments:

Hello Blues fans! I will attempt here to document the life and times of the Seattle blues band that I front, Harmonica Playboy & the Midnight Movers, and maybe spew out some opinion and local blues music history pieces along the way.

The band consists of myself on amplified harp and vocals, Stoop Down on guitar, the Kid on guitar, the Mighty Mite on electric bass, and the Spiderman on drums. This is the usual lineup anyway - everybody plays in at least one other band. We play clubs in the Seattle area, with occasional trips to the suburbs and beyond. Check out the band's web page for more info.

Anyway, please give me some feedback on what you see here, and remember what the Boogie Man John Lee Hooker said - "Nothin' but the best, and later for the garbage!"
Posted by Mike Lynch at 3:41 PM 2 comments: