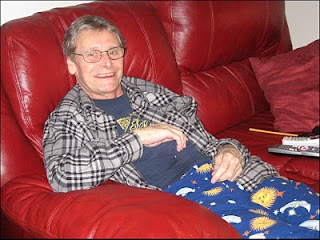 I dropped by our friend (and drummer) Kirk "KT" Tuttle's place today to check in and to pick up some stuff that I left there last week.  He was doing OK today, but said that the last two days were pretty bad due to stomach problems and lack of sleep.

After his wife Jimi Jean died last year KT has living in a small apartment in Seattle's north end, very close  to the Ballard locks.  His liver disease is still progressing, and, being an Air Force  veteran (flight controller), he is getting medical treatment from the VA.  He can't work or play music any more, so he is living off of a small monthly social security check.

The liver disease symptoms include bouts of dizziness, sever cramps, back and leg pain, nausea, and disorientation.  During a bout of dizziness about a month  ago, KT fell in his bathroom and  fractured one of his hips.  He spent about a week in the hospital after that, and is getting around now with the help of a walker.  He is scheduled to begin rehabilitation therapy at the end of this month.

I asked KT about the FaceBook page that has been set up for him, but he didn't know anything about it.  If any readers here know anything about that page, please let us know what's going on so that we can enlighten KT.  He also said to say thanks to the friends that have been visiting and bringing the occasional dinner for him and/or running a few errands.
Posted by Mike Lynch at 7:09 PM 1 comment:

WOW! I’ve sure had a lot of folks asking me “When is the Harmonica Summit”? That’s a good sign and here’s the lowdown. On Saturday March 6th at the Melody Ballroom, we will be holding the 15th Annual Blues Harmonica Summit.


The featured Harp players will be:
■ Johnny Ward—Hands down the man who has been playing the Harp longer than anyone here in the Northwest! A veteran of many groups including the Jokers, and numerous jug bands, Johnny brings one of the most original styles out there today.

■ Mike Moothart—Another Northwest vet, who has served time in the Switchmasters and the Jim Mesi Band. A hard blowing, no nonsense player, who specializes in Chicago and Southern style harp.

■ Little Ronnie Sirota—Originally from the big city (NYC), Ronnie will be playing the Summit for the first time. Whether playing solo or with a group, Ronnie displays an excellent sense for playing the Real Blues.

■ Tim O’Hare—Another first time addition to the Summit will be another of our great local Northwest harp blowers. Tim has listened and learned all these years and now we all get to hear the fine result.

■ Bill Rhoades—Your host and MC of the show will be another Northwest harpman. Bill has won the “Muddy” six times for “Best Harmonica Player” and recently contributed a solo harp part to the movie “Our City Dreams”.

Backing all of the featured artists will be an All-Star House band fronted by world renowned Bluesman Paris Slim on guitar and vocals.

Join us Saturday March 6th at the Melody Ballroom (downstairs) 615 SE Alder, Portland, OR. The show starts at 8 pm and should run until about midnight (Sorry—21 & over). Admission $10 at the door. CBA, Washington Blues Society, and Rainy Day Blues Society members will receive $1 off with membership card.

Note: This article originally appeared on the Cascade Blues Association web site.
Posted by Mike Lynch at 7:25 AM No comments:

Email ThisBlogThis!Share to TwitterShare to FacebookShare to Pinterest
Labels: Show Preview
This just in from our Portland, OR correspondent, "Uncle" Ray Varner:

A sampling of Portland musical talent joins veteran blues artist and harmonica ace, Charlie Musselwhite and his band, in a benefit concert at the Aladdin Theater, on Sunday, April 25th. All proceeds from “Remember Me” 2010 will go toward the scholarship that has been established in memory of Portland 's late harmonica maestro, Paul deLay , at Ethos Music Center , a nonprofit dedicated to music education for youth in underserved communities. A committee of members from the Portland music community has again organized this annual benefit for music education. Last year’s event filled the Aladdin Theater and increased the growing scholarship fund by several thousand dollars.

Headlining this year’s celebration is a well-known friend of the blues and of Paul deLay – the award-winning bluesman, Charlie Musselwhite. As Rolling Stone Magazine puts it, "With unabashed excellence, Charlie Musselwhite and his tight band set the standard for blues bands everywhere." The Blues Foundation recently released their list of inductees into the Blues Hall of Fame for this year. The list includes this highly esteemed vocalist and harpist. More on Musselwhite follows below.

Paul deLay's friendship with Charlie Musselwhite goes back to the early 1970s, when deLay's band was the backing unit for many of Musselwhite's Northwest tours. Paul and Charlie remained close friends over the years, and performed on many all-star "Harmonica Blow-offs" together, and led a harmonica workshop together, pictured below, at Portland 's Waterfront Blues Festival in 1999. Two of the featured performers in the "Remember Me" concert, Franck Paris Slim" Goldwasser and Rick Welter, who both relocated to Portland in recent years, played in Musselwhite's early bands.

Charles Lewis founded Ethos Music Center in 1998 in response to budget cuts that severely limited arts education in Oregon ’s largest public school district. Located in Northeast Portland , the organization’s name comes from the ancient Greek “Doctrine of Ethos,” which held that music can change your thoughts, moods and actions. Ethos believes every child should have the opportunity to make music. Contributions can be made at any time at www.ethos.org or sending a donation to Ethos Music Center , 10 N. Killingsworth Street , Portland , OR 97217 .

Tickets for this event are $20 in advance and $25 at the door. Those under 21 and accompanied by an adult are welcome to attend. Advance tickets are available at the Aladdin Theater Box Office (503.233.1994) or online at www.aladdin-theater.com

Paul deLay wrote the haunting lament “Remember Me,” after his mother and the mothers of three band members passed away in a two-year period in the late 1990s. It was released on the Paul deLay Band’s Heavy Rotation CD (Evidence Music) in 2001. Paul deLay passed away on March 7, 2007 from complications of late-stage leukemia.
Posted by Mike Lynch at 7:10 AM 1 comment: