The Midnight Movers played at the New Orleans Creole Restaurant last Friday and Saturday night. Man, we love playing at this place, and usually pull in a pretty good crowd of revelers. But I’m here to tell you, Pioneer Square was dead on Friday night like I’ve never seen it before. Even the hot dog stands on the street weren’t doing any business.

How dead was Friday night? Well, take a look at the photo below, which I took during the band’s second set. 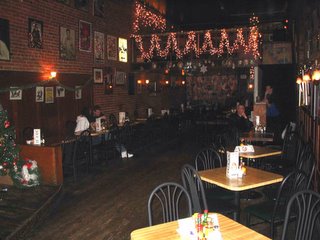 Watch out for the tumbleweeds! Hey, where were you guys?
A few people finally did wander in, and we played until the usual 1:00 AM quitting time. The funny thing is, we made about $80 in tips from this miniscule crowd, totally unsolicited. Go figure.

Anyway, after the gig, I wandered across the street to get a hot link before heading home, and there at the hot dog stand I was struck by a REALLY GREAT idea. Why not cross the street and check out Larry’s? Yes, I knew that Larry’s was now a hip hop club that features go-go dancers, but the sign said that they were open until 4:00 AM, and I used to play there a lot back in the day, so off I went.

I was frisked for weapons at the door by a large, skeptical-looking doorman. I then paid my $10 cover and wandered in. I hardly recognized the place. The old elevated bandstand was still there, but the kitchen, lunch stand, and pool room were all gone. The place was just a big box with a couple of bars and a large sound system blasting away. There seemed to be about 150-200 people of color dancing and standing around.

Just then I got my second REALLY GREAT idea. What I needed was a drink before the bars closed. On my way to the back bar, I stopped by a table that appeared to be a pit stop area for the go-go dancers. As I gazed upon this spot for a moment I noticed that someone was shining a flashlight into my face from a few feet away. I couldn’t see or really hear this person, but he appeared to be yelling at me. Suddenly the very large person with the flashlight was in my face and I realized that he was wondering – did I want to leave the premises under my own power, or did I want “help” from him?

Well, I’ve always preferred leaving bars without help, so I headed for the door with my newfound friend breathing down my neck. The crowd parted like the Red Sea before me, and before I knew it, I was on the sidewalk again with my escort telling to doorman to not let me back in.

My total time inside Larry’s? Oh, about three minutes, if you count the time it took to frisk me before entering. Who knows – with my advanced age, square clothes, and unusual skin color, I was probably setting off bouncer alarms all over the place from the moment I walked in. Oh well, I left uninjured, so it’s all good…

My, how things have changed, not just at Larry’s, but in the whole Pioneer Square area. Kids, believe it or not, back in the mid ‘80s through the mid ‘90s Pioneer Square was smokin’ with live music joints that regularly featured blues and R & B bands. Clubs like the Old Timer’s Café, Hibble & Hyde’s, Doc Maynard’s, the Merchant Café, the Pioneer Square Tavern/Fenix, the New Orleans, the Central, and Larry’s all featured bands at least two nights a week and the Larry’s gig ran from Wednesday through Saturday. A four-night gig is unheard of these days – come to think of it, a two-night gig is pretty unusual now too.

Hey, I'm not making this stuff up. Check out these photos of actual musicians playing at Pioneer Square clubs. Note that in several photos, there are fans enjoying the music. This could be you! 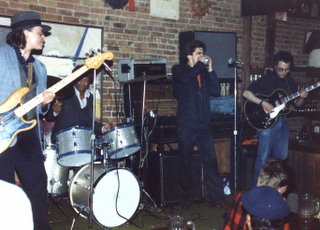 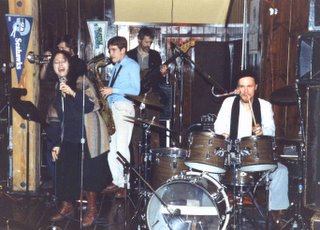 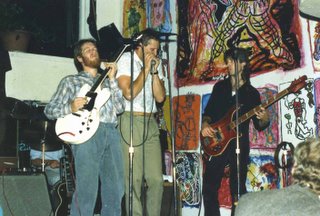 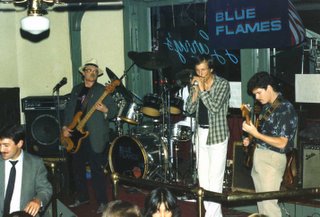 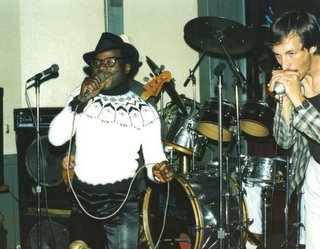 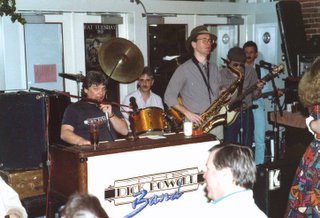 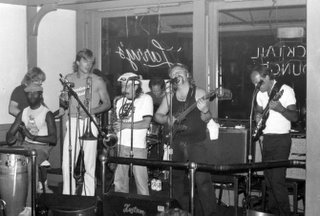 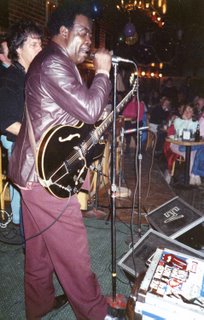 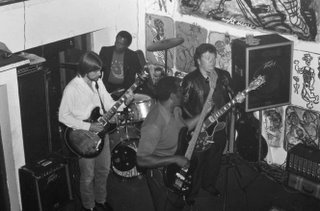 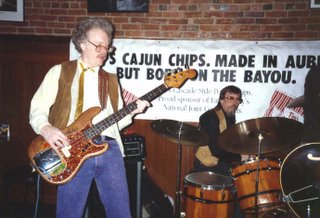 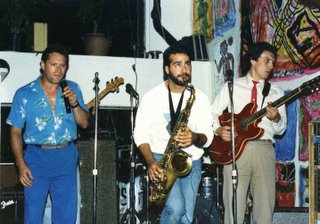 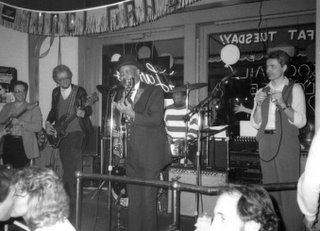 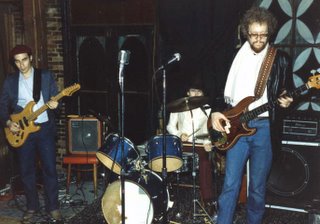 Twist Turner & the Turning Point - The Central Tavern (1987)
There are currently a couple of clubs in the Square that do feature rock acts (the Fenix Underground, and the Central), but only two clubs remain that hire blues bands. The New Orleans Creole Restaurant never stopped (God bless owner Gaye Anderson!), and Doc Maynard’s switched from a heavy metal format to a mixture of blues and blues/rock acts earlier this year. DJs rule everywhere else.

Will live music ever make a comeback in the Square? I dunno...good question - what do YOU think?
Posted by Mike Lynch at 4:59 PM 5 comments:

I wandered into a local joint the other day to see what band was playing on the weekend, and to have a quick pop. This is a bar and restaurant in my neighborhood that caters to a very broad clientele, including slumming 20-something yuppie types, middle aged bikers, oldster retirees, and just plain alcoholics from every age group. There’s a pull-tab counter in the back, the drinks are strong, and the cigarette smoke lingers like a gray fog at the ceiling, permeating everything and everybody in the joint…

But wait a minute; there was something different at Ye Olde Smokey Dive that day. Then it struck me – no one was smoking! For my first time in the place, I could actually smell women’s’ perfume as I walked by the tables. Usually when I visit, I try to stand by a door or a fan to minimize how bad I reek when I get to my next destination. But this day, even though the club was pretty full of regulars as usual, it didn’t smell like a giant ashtray. What a concept!

This is a result of the recent State-wide ban on smoking in public places, and I think that the new law is a terrific idea. Hopefully, this will encourage music fans that have been staying out of clubs because of the smoke to give it a try again. Will the new law negatively impact the size of the bars’ existing customer base? I dunno, but this place seemed to be jamming right along with a room full of regulars on a week night, just like usual.

You’ve got to feel for the smokers you see huddled outside the bar in the pouring rain getting their fix, though. I believe that the new law requires that smokers have to puff away a minimum of 25 feet from any building entrance. Can you imagine the cops bothering to enforce that requirement? Not gonna happen, baby!!
Posted by Mike Lynch at 9:18 PM 2 comments: