The return of Lonesome Jerome. 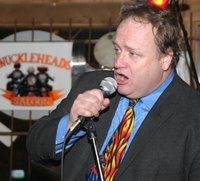 I was at the Highway 99 Blues Club last Friday checking out the West Coast R & B Summit show when I ran into Mark "Lonesome Jerome" Dufresne (left). He confirmed that he's no longer working as the lead vocalist for Roomful Of Blues, and is now living back in the Jet City with his wife Laura.

Welcome back Mark! Come on down to the Blue Monday jam one of these days - we'd love to see and hear you singing and blowing harp on the scene again.

Note: Mark's photo was created by Henry Benson. From the Alligator Records webpage.
Posted by Mike Lynch at 2:01 PM 1 comment:

While I was perusing the October 2006 edition of the Washington Blues Society's Bluesletter today, I read Roy Brown's monthly "Sound Off" column. In this column, Roy reprints a letter from Seattle singer Mary McPage, who fronts the Mary McPage Band.

In her letter, Ms. McPage, discribes the 1998 Seattle Blues Nazis as a "...negative, hateful, splinter group..." of the WBS. Then she describes the current Blues Nazis organization as "Blues Police" who are arrogant, "ignorant idiots." Apparently, she picked up the Blues Police moniker from a recent Blues-To-Don'ts blog article.

Now here's the thing that really concerns me - remember our last meeting (sheesh, a couple of years ago now) when we all decided to keep a low profile? We all agreed that there wasn't any money in trying to advance the cause with people that still think that "Messin' With The Kid" was written by Jake and Elwood Blues, or that "Somebody Loan Me A Dime" was written by Boz Skaggs (or the Allman Brothers). So, what the hell - which one of you guys pushed Ms. McPage's button? Frankly, I'm confused - there hasn't been much in the way of dissenting opinion in the Bluesletter for years, and I doubt that Mary's band gets heckled by any of our minions, so why the whining on her part?

You know what? I think she's mad at Brother Chesnut. Now, I know (I know!) that sometimes our Art Director, Phil Chesnut, can't help from speaking his mind. Heck, Ms. McPage says in her letter that "...Just because one can write about the blues, take a picture of blues musicians or perhaps draw nice litle pictures, does not make a blues expert..." Goodness! Take one for the team, Phil!

Anyway, let's hope this latest incident will blow over and we can continue our Blues work behind the scenes. Keep up the good work, fellow Blues brothers and sisters! Check your decoder rings for our next meeting date.
Posted by Mike Lynch at 6:32 PM 1 comment:

I had planned on talking about a number of music DVD’s in this space. That will be one of the things, along with books and recordings, that I will save for the fall and winter Musings.

Recently, I’ve been putting together what I think is a top-notch show that has had my full attention for the last two months. Below is the press release. It appears on the KPLU and the Highway 99 Blues Club web sites. Everyone involved is hoping you can join us for what I think will be one hell of a party! 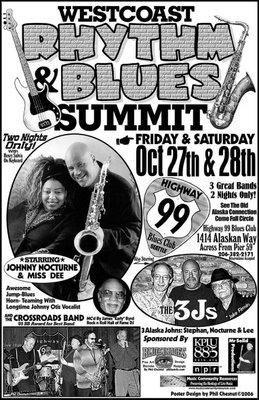 The R&B Summit also includes The Crossroads Band, the Washington Blues Society’s “Best Band” of 2005. Crossroads is a five piece group of seasoned veterans. The Tacoma Weekly said about the band’s new CD “In case you have never seen them play yet, this record makes you want to change this fact as fast as you can.”

Master of Ceremonies for the show will be Rock and Roll Hall of Fame disc jockey, Jimmy “Early” Byrd. “Early” Byrd is the first African-American disc jockey elected to the Hall. The other DJ’s in the Hall of Fame are Alan Freed, Wolfman Jack, and Dick Clark.

When you see a musician on stage having fun, remember all the hours and hard work it took to get to that place. Also take into account the true nature of the beast. I think the late, great Hunter S. Thompson summed it up best: “The music business is a cruel and shallow money trench, a long plastic hallway where thieves and pimps run free, and good men die like dogs. There’s also a negative side.” Amen, Brother Thompson!

Peace! Check you on the rebound. 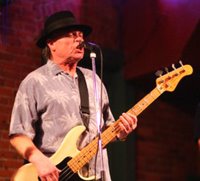 Note: The poster that appears in this article was created by Phil Chesnut.
Posted by Mike Lynch at 10:04 PM No comments:

Down to the nightclub...

You know, the Great Northwest has a sort of embarassment of riches when it comes to blues harp players. Sheesh, Portland alone is the home of Paul deLay, Curtis Salgado, Bill Rhodes, Johnnie Ward, Mike Moothart, and LynnAnn Hyde.

We've got some good 'uns in Seattle too, including Steve Bailey, Kim Field, Mike Wylde, Brian Lee, Bubba McCoy, Jim King, Dave Prez, Paul Green, Jeff Herzog and John Deely (forgive me if I've forgotten anyone). Speaking of Dave Prez and Paul Green, I had a chance to see these blues harp maestros playing live recently - check this out: 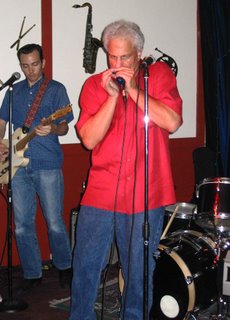 I caught up with Dave Prez (left, with guitarist Eric Daw) and the Combo Nation at the Salmon Bay Eagles Club. Besides Eric, the other members of the Combo Nation that night included drummer (and sometime vocalist) "Sweet" Billy Spaulding, and multi-instrumentalist/singer/songwriter Jeff Simmons on electric bass and keyboards.

Dave is one of my favorite harp players. He is very good at applying the tongue-blocking technique, which produces his big, fat tone. I guess you could say that Dave is sort of Seattle's Little Walter specialist - you ought to hear his version of Walter's "Fast Boogie." I'm here to tell you he smokes on that tune! However, he was a little hard to hear clearly this night except right in front of the bandstand, probably because he wasn't micing the small Gibson amp that he was blowing through.

The band was playing straight ahead blues tunes, with the always excellent Eric Daw doing most of the singing while I was there. Unfortunately, I had to leave just as Mr. Simmons was preparing to do a set from behind the keyboards - I hear the band had a ball until closing time. 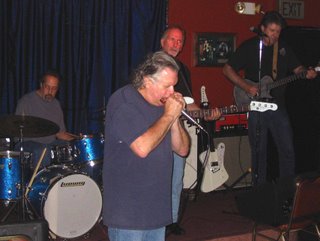 Paul has a harp style unlike anyone else in town. He is a very capable player, and blows very fast accurate runs over all three octaves of the diatonic harp. He is also a terrific singer, and ventures into the "Soul Blues" territory often during his show. Mark Riley also contributes vocals during the show, and can usually be seen playing his own handbuilt, custom guitars.

On the night I saw the band, Paul was sick with some sort of chest fever and was having a very difficult time singing. I got up and sang a few tunes with the band to help out. The band sounded great, as usual. I hear that some other singers showed up later to help out with the vocal chores also, so I guess that Paul made it to the end of the gig.

Here is the latest on Curtis Salgado's struggle with liver cancer. This press release is from his web site.

Curtis Salgado underwent a successful liver transplant surgery on Saturday September 30, 2006 at The Nebraska Medical Center in Omaha, Nebraska according to his manager Shane Tappendorf.

The surgery which took approximately 6 hours was performed without complications and Curtis has now been moved out of the intensive care unit and a full recovery is expected. The singer, songwriter and harmonica idol was diagnosed with liver cancer March 23, 2006. Salgado's treatment included shrinking the tumor in June in Portland, OR and multiple evaluations at transplant centers around the country.

"I am fortunate to be under the care of an incredible team of doctors and nurses This transplant is truly a miracle - I have an enormous sense of gratitude to the donor's family and sincere sympathy for their loss," the 52-year-old performer said from his hospital bed this week. I am extremely grateful for the overwhelming support by everyone at The Nebraska Medical Center, from my family, friends and fans and and from the citizens of Omaha. I thank them for their love and hospitality." Salgado's transplant was part of a record breaking 37 procedures in September, 17 of which were liver transplants.

The singer-songwriter and harmonica idol was raised in Eugene, OR where he is best known as the inspiration for John Belushi's character of Joliet Jake in the Blues Brothers as well as his six year involvement with the Robert Cray Band. Salgado went on to become a member of the Grammy Award winning band Roomful of Blues and enjoyed a short stint as vocalist for Santana. The former Handy Award nominee has currently been working in Nashville, TN on new material for his next album as a follow-up to his last three critically acclaimed CDs for Shanachie Entertainment.

In the Pacific Northwest, Salgado is also highly respected for his 17 year commitment to sobriety and for his continued dedication and countless speaking engagements in educating young people on the dangers of alcohol and drug abuse.

In addition to the money raised from donations and benefits, Salgado was able to secure a substantial loan allowing for the transplant. A special account has been created for donations to help Salgado with medical costs, post surgery recovery, medications and repayment of the loans. Donations can be made for the "Curtis Salgado Fund" at any US Bank or can be mailed to US Bancorp, 2550 NW 188th Avenue, Hillsboro, OR 97124. For additional information, please visit www.curtissalgado.com.
Posted by Mike Lynch at 8:57 PM No comments: