I have been playing Hohner Harmonicas since 1972. I started out with the Marine Band, moved on to the Special 20, and have been using the Golden Melody model for years now. In my opinion, one thing has always been consistent with the Hohner harps over the years - poor quality control.

Buying harmonicas at the music store is problematic, because, unlike other instruments, you can't play the darn things before you buy them! Every store has the totally inadequate countertop bellows device that can be used to blow air through the harp, but all this tells you is if the reeds are working, not how hard (or easy) the thing is to play. I can't tell you how many times I've found a brand new harp impossible to play, and, because I've had it in my mouth, the store won't take it back. 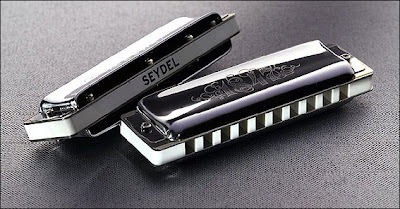 What to do? Well, you can buy a Hohner from the music store then send it out to a customizer, who can dramatically improve the playability of the instrument for a typical fee of $100-$150 (for a 10-hole diatonic harp). Of course, the pros keep these guys pretty busy, so the waiting times can be long. Plus, once you add the customizing fee to the current $30-$40 price of off the shelf Hohners, you are looking at a pretty large hunk of change for a complete set of instruments.

So, I was intrigued a few weeks ago when Seattle blues harp maestro Bubba McCoy called to tell me that he had been set up as an authorized distributor of the Seydel line of harmonicas. I had been hearing about the Seydel harps for a while, so I ordered a Seydel Silver harp in the key of C to replace the terrible Hohner Golden Melody I had purchased recently.

Wow - what a difference! The Seydel sounds great, plays beautifully, and feels good in the hand and mouth. On of the nice things about Seydel is that you can order the instruments (including chromatics) in all sorts of tunings, including the hard to find "low" tunings, which means I can finally buy the low F harp that I've been wanting. Of course, the Seydels should be an improvement over the Hohner - at a list price of $90 a pop for the Silver instrument (with a plastic comb), they are not cheap. However, if the quality of the next Seydels I purchase is the same as this first harp I bought, I will start retiring the Hohners.

Interested? First, check out the Seydel web site for more information on the product line, then give Bubba McCoy a call at 206-799-7675 for pricing and availability. Tell him the Playboy sent ya!

Posted by Mike Lynch at 2:00 PM No comments:

Long recognized as a highlight of the autumn blues season, Raven's Jam For Cans for 2008 certainly lived up to all expectations. Conceived over a decade ago by Sheri and Raven Humphres as a benefit for Northwest Harvest, this event has grown tremendously over the years with not only great music, but with a chance for out blues community to lend a hand as well.

Boasting another gigantic lineup with some of the Northwest's finest blues talent, this all day blues marathon ran smoothly, as usual, at Seattle's stellar blues joint, Highway 99 Blues Club. Ed and Steve and the whole Highway 99 staff, along with the event producers, made sure that this was another first class show.

Though this reporter got there a bit late, I still think that I was able to capture the essence of this all too worthy blues event with my camera. 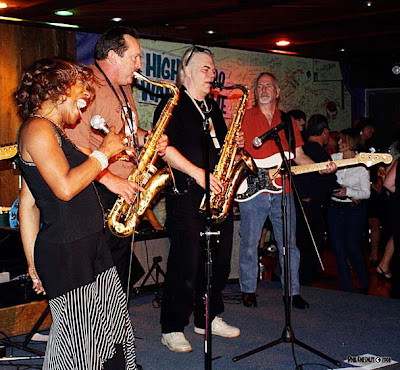 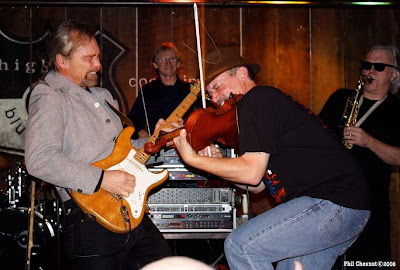 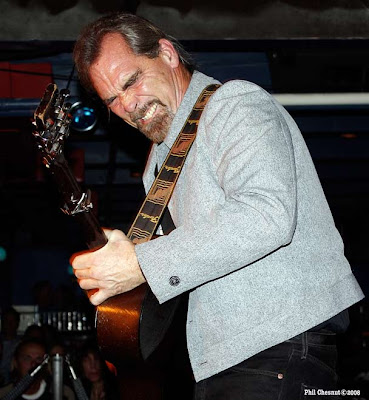 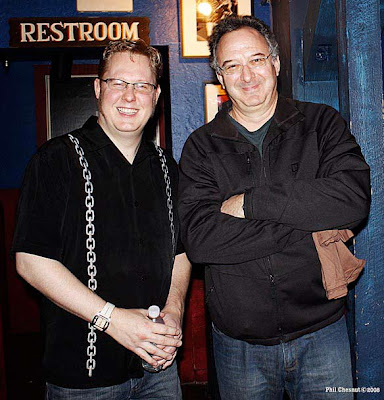 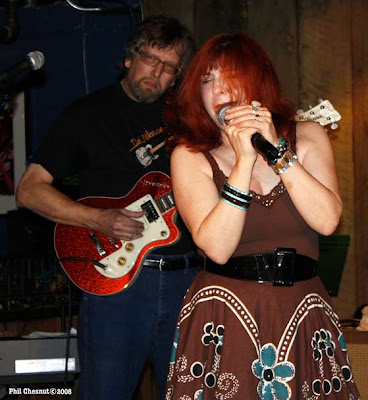 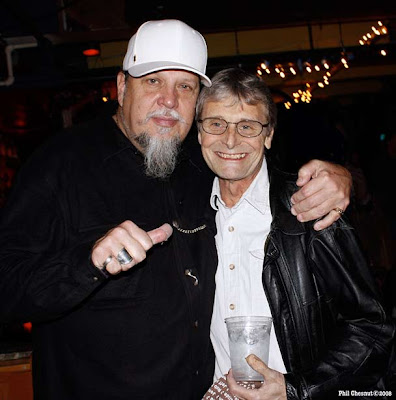 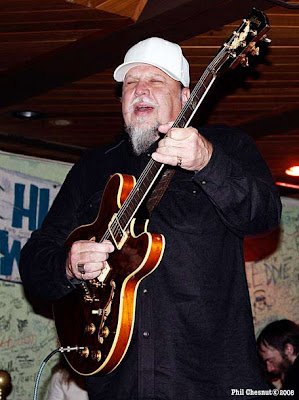 David Brewer
Posted by Mike Lynch at 8:27 PM No comments: 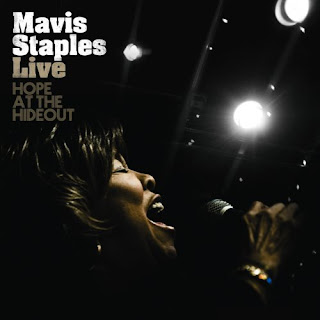 I can’t think of a better way to celebrate the historic victory of our President-elect, Barack Obama, than to run right out and pick up a copy of Mavis Staples’ new live CD, "Hope at the Hideout." Mavis Staples and her family were themselves an important part of the civil rights movement in this country; marching with Dr. King, singing at many of the important events of the struggle, writing, recording and performing songs that lifted the spirits and stiffened the resolve of the thousands of Americans who repeatedly put themselves in harm’s way to further the cause of freedom and equality for all our people. This CD is a live, impassioned performance of classic songs of that struggle, interspersed with Mavis’ commentary and stories of this amazing history. This performance clearly demonstrates that, at age 69, she has lost none of her power as a singer and performer – and none of the determination, intelligence and righteous anger that carried the Staples Singers through half a century of relentless touring from the little wooden churches of the rural south, to the top of the hit parade in the '70s with songs like "I’ll Take You There."

This CD was recorded in the classic, spare Staples Singers style - Only a trio of musicians, a trio of backup singers (including surviving sister Yvonne Staples), and Mavis out front, one of the most amazing voices in the history of American music.

I have to offer big kudos to guitarist Rick Holmstrom for his superlative, tremolo-laden performance here. I knew Rick was a fine guitarist and a powerful bluesman, but Pops Staples’ shoes as a guitarist are huge and hard to fill. Pops’ guitar playing came right out of the Delta, and really encompassed the entire history of the Blues as a unique, subtle, soulful finger-style foundation to all of the Staples’ music. Holmstrom does an amazing job of providing that foundation here – capturing the complex spirit of Pops’ music without ever sounding like just a copy of his work – Holmstrom rather inhabits this music, while bringing his own ideas and sense of creativity to the songs as they unfold.

The set opens up with a reworking of the old Buffalo Springfield tune "For What It’s Worth" – sounding perfectly ominous, leading up to a presidential election that many feared wouldn’t even be allowed to happen, and if it did, would surely be at risk of being stolen. But this sort of paranoia was always what the Staples Singers struggled to overcome, and the very next song is "Eyes on the Prize." The problem and the solution. Oppression, and struggle. This mix continues throughout the performance with songs like "Down in Mississippi," "Waiting for My Child" and "Why Am I Treated So Bad" talking about life’s struggles, and anthems like "We Shall Not Be Moved" and my all time favorite "Freedom Highway" ("...walk, on freedom highway, walk, each and every day… made up my mind, that I won’t turn around…"). By the end of performance she has the crowd on their feet, singing along, filled with spirit!

Mavis Staples has been getting me out of bed, helping me do things I need to get done ever since I got my first Staples Singers ’45 at the age of 14 ("Will the Circle Be Unbroken" - also on this CD - with her singing lead on the anguished flip side, "Don’t Drive Me Away"). I told her about finding that record (in Nebraska) when I talked to her backstage at Bumbershoot a couple years ago. "Honey I was just a child when I recorded that song!" She said this with a far away look in her eye, and leaned back into the couch we were sitting on together and sang 'Oh Lord… don’t drive…. your child…. away.'

One of the best moments of my life. Get this CD. You’ll see what I mean.

Come on, baby don't you want to go...
By John Stephan
In August of this year, I traveled to Chicago to visit friends and check out the blues clubs. I heard Willie Davis and the All-Star Blues Band at Buddy Guy's Legends club. The place was jam-packed and the band was loud and proud. Great typical Chicago style blues - nothin' fancy, but the crowd loved every minute of it.

A new location has been planned and was announced in the club's August calendar. The first thing that's evident is the diversity of acts who are booked there, although all are firmly rooted in the blues. With a central national location and the deep heritage of Chicago, the clubs don't need to compromise with the music, as much as they do here in Seattle.
I heard a group at the "Blues" room at House of Blues. That band was so stale, they probably wouldn't last very long here. Very "Disney-fied", to quote Mark Hoffman, author of "Moanin' At Midnight." The next night or so, I then proceeded to Kingston Mines, to hear Eddie Shaw and the Wolf Gang. I'm telling you right now, Eddie sounded as good as when I heard him with Howlin' Wolf at Sicks' Stadium, right here in Seattle in 1975. Kingston Mines has two stages, so when they change acts, everyone goes into the adjoining room. When I left around 4:30 AM, the place still was packed with about 400 blues fans. Lots of younger folks, mind you. 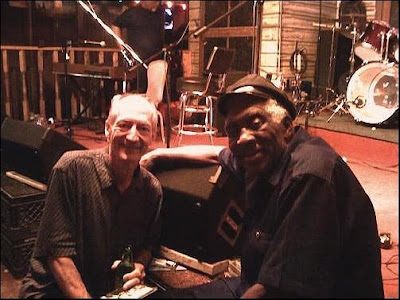 I visited Twist Turner's new studio - fabulous, indeed! Originally from Seattle, Twist moved to Chicago about 25 years ago, and has made quite a name for himself as a drummer, producer, and recording engineer. Try to top that! His latest release by ZZ Hill, Jr. , "Goin' To Mississippi," is up for some major awards. Check out Twist at http://www.deltaroots.com/.

Chicago has always been special to me, as my father, uncle and aunt lived in the Maxwell Street area from 1928-1934. I hung out on Maxwell Street in 1972, when it was still intact as the Sunday street musician/flea market mecca. it's long gone, now, but anybody who tries to tell you that the blues is dead should spend some time in Chicago. Granted, most of the gigs are in the outlining area, but that's merely an indication of the cost of rent in town - a typical phenomenon all around this great land of ours.

Halloween occuring last night had to be a good thing for all of the Halloween maniacs, right? Well, for everyone that partied like a rock star and maybe passed out in their Sarah Palin costume, here's some good news - the Washington Blues Society is exteding Halloween one more night! That's right, you can attend the WBS benefit at the Salmon Bay Eagles (5216 20th Avenue NW, in Ballard) tonight, and please do wear your costume. Live music will be provided by Jeff & the Jet City Fliers. 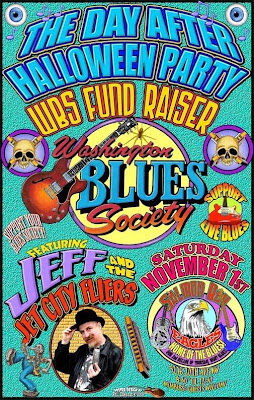 Poster created by Phil Chesnut.
Posted by Mike Lynch at 10:13 AM No comments: