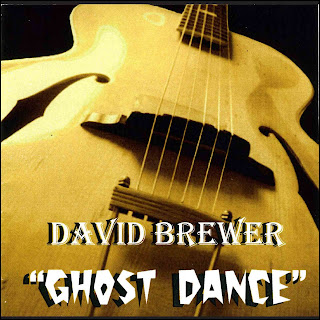 David Brewer is an artist who defies convention. His new CD is an extension of his move to more solo performances in recent years (ease of touring reportedly being part of the advantage). But make no mistake here – there’s nothing “acoustic” about Brewer’s live performances, or about his approach on this CD! The absence of bass or drums here doesn’t mean the tunes rock any less - Brewer’s music is still centered around his big, fat, electric guitar sound and his driving sense of rhythm.

Brewer takes great pride in his Native American heritage (if you don’t know the history of the “Ghost Dance” in those desperate last days of the plains wars, I suggest you check it out – part of the story is included in the CD liner notes) and this music is firmly rooted in the land we continue to uneasily occupy together, transcending genres, all songs that Brewer has made totally his own. Music of North America – strong, plain, honest, straight ahead music, accurately reflecting the man who makes it.

The recording is well done here – Brewer plays all guitars, in layers, often with a flat-top guitar on the bottom, and electric rhythm laid over that, and those patented soaring lead guitar solos over the top. Vocals are right up front, with vocal harmony tracks coming in at times. Tambourine and various shakers and percussion are woven into the sound at times, but the driver for this music is always guitar; that from-the-elbow kind of rhythm–playing that Don Wilson of the Ventures modeled so well for musicians of our generation. This kind of one-man-plays-it-all project is tricky – I’ve heard CDs done this way that sound stiff and artificial – but Brewer’s CD has an integrated, organic feel to it that works throughout.
None of the songs on this CD were originally written by Brewer. The tunes range from a Chuck Berry classic, “You Can’t Catch Me” (the one about the “Airmobile”) to the old C&W favorite “Crazy Arms,” to more recent songs by Greg Allman and Billy Gibbons of ZZ Top. All of these tunes are well suited to Brewer’s eclectic style, and they all sound perfectly well-worn, like David’s been living these songs, and life they describe, for as long as any of us can remember. And you know what? That’s the truth, right there!

Posted by Mike Lynch at 9:35 PM No comments:

A few words about basses…

Mike asked me to write a piece about my basses, and specifically about ace instrument maker and former Seattleite Steve Davis and the “Tall Cool One” basses he makes. This seemed like a good idea for something to write about – it had never occurred to me, although people come up to me at gigs fairly often (usually other bass players) and ask about my basses (whichever one of the four I happen to be playing at the time), and I’m always happy to talk about them.

I owned only one bass for the first 20 years of my professional career, and I’ve still got it, but it is stowed away somewhere nice and safe and I take it out to a gig about once a year. It’s a 1959 Fender Precision Bass that I got in a swap deal with the original owner in 1965. It’s a sweet ax, with great tone and a nice neck. I’ve had the same set of strings on it for over 20 years too; big heavy flatwounds, of course, and they are completely dead – no twang left whatsoever. Just a good solid deep-throated thump. I remember reading an interview with Donald “Duck” Dunn (of Booker T, Otis Redding and Blues Brothers fame), and he was talking about how he broke the G string on his Precision (part of set he’d had on there for 17 years at the time, as I recall), and he just burst into tears at the thought of having to break in a new string, or worse, a new set of strings!

People started coming up to me at gigs after awhile and looking at this old bass with such lust in their eyes (old Precisions are rapidly increasing in value) that it got kind of scary – so I got another one – a Mexican Precision, really well made (I tried out a bunch of them), with a nice straight neck and thin frets that was really close to my 59, for about $300 bucks in around 1992. I set it up the same as my other one, low action, fat flats, and it sounded almost as good. And I didn’t have to worry so much losing my old one and the history we shared.

A couple years after that, I started getting interested in five string basses – both because they had an extra low string, and because I heard a few that had advanced electronics – big fat active pickups that captured thick overtones – I was listening to a funk band playing right before us – Guitar Slim at that time - at the Bite of Seattle, and the sound of this guys five-string was amazing – the sound was so fat that individual notes sounded almost like chords. So I found one I liked and played it exclusively for several years (once I figured out how to integrate that additional string). Five strings also have a slightly longer neck than regular electric basses – gives the strings a little tighter feel, and, for a guy with big hands, the longer scale felt just right. I still have it, and I still play it every now and then.

Here’s where Steve Davis came in. Steve used to live up around North Bend, and he used to come out and hear Guitar Slim a lot. He and Pat Chase, our guitar player, got to be friends, and he made some cabinets for Pat’s house in Snoqualmie that were really nice. Steve is a wood worker and furniture maker by trade and he does very fine work. So it came as no surprise to Pat when Steve talked about making a guitar some day. The surprise came when Steve actually did make Pat a guitar – a gorgeous instrument in Pat’s favored Stratocaster design, but a custom-shop instrument all the way, including “Guitar Slim” inlaid in mother-of-pearl on the fretboard.

So it was somewhere around 1999, we were playing the Pike Market Street Fair when Steve came over on a break, and said “Marcus, I’ve been thinking… how would you like me to try my hand at building you a bass?” Well, what do you say to that? “HELL YES!” is what you say. Especially after he explained the deal to me – I help him with the design, as this was the first bass he’d attempted, and I buy the pickups and hardware, and he kicks in the wood and labor. At this point, I’m looking up into the heavens with my head swimming - as middleweight champ Rocky Graziano used to say, “somebody up there likes me!”

So Steve came over to my house and swarmed over the basses I had, with rulers and micrometers… Whaddya like about this one? How about this one? What body style do you like? What scale do you like? (I opted for the long scale, which at the time was rare for a four-string bass.) What color do you want? (As it happens, I had a copy of a great coffee table book called “Blue Guitar” that had a custom guitar with exactly the blue finish I wanted. Steve contacted the guy that made the guitar in the book, and got that exact finish for the bass – this is the lengths that he will go to get things right!) 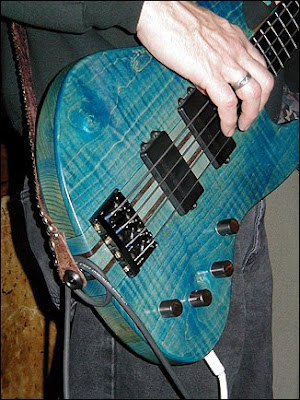 The Tall Cool One

Over the next couple of years I would get tantalizing glimpses of this work in progress via E-mailed photos (Steve, by this point, had moved to New Mexico, where he was making custom furniture for the likes of Robert Redford.) And then, one lovely spring day, the Blue Bass arrived. I picked it up, plugged it in, and it was like I’d been playing it for years immediately – because it had everything I liked built in from the beginning! Big, active Bartolini pickups (I’m sorry, but once you get used to these, going back to a Fender Precision is difficult, if not impossible in the long run), neck-through-the-body construction for amazing sustain and a solid feel, and a beautiful finish. It also had a nameplate on it that said “Tall Cool One” – a national hit song for the Wailers, Mike Lynch’s nickname for me since the early-80’s Bluestars days, and now the resonant name of the Davis bass design.

I love my Blue Bass, and more recently, Steve finished a sister instrument for me – “The Red Bass.” She is really a beauty – refined, sleek, cut away in all the right places, a pleasure to hold onto and play! The Red Bass has an EMG pickup (my choice again), and getting the sound just right on her is still a work in progress (I had heard great things about the EMG, but it is… different). The bottom line is that this beautiful bass plays just great. 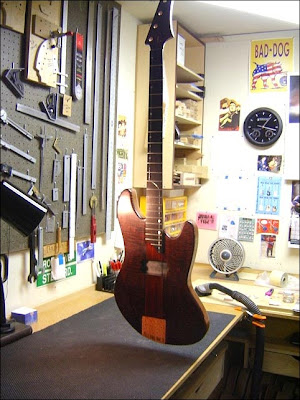 Red bass - in the shop 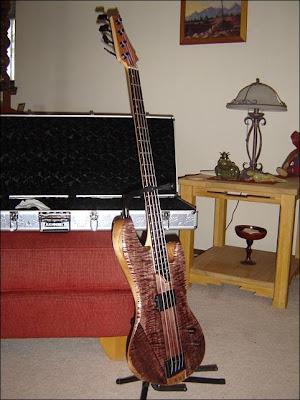 I’ve had tremendous good fortune in the people I’ve met and became friends with throughout my musical adventures, and I’m here to tell you, the people around you, supporting you, educating you, giving you the gift of their friendship – this makes all the difference in the world of making music. Steve Davis is one fine instrument maker, and one hell of a good man! 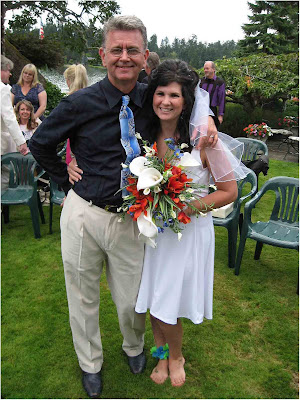 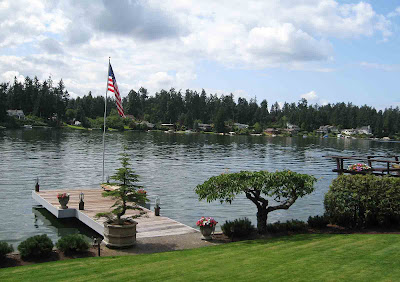 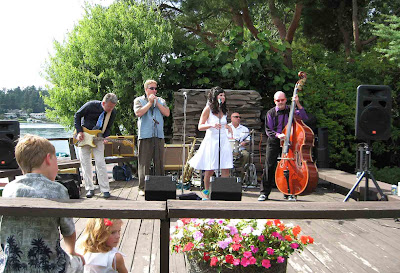