Here's a nice selection of posters from blues shows in both Seattle and Portland that span the years from late '70s to 2007. My thanks to John Marshall and Isis Thor, who contributed most of these posters (those contributed by John Lee and Phil Chesnut are the exceptions). I have identified a couple of the artists only - if anyone can identify any of the others, I would appreciate it. I suspect that John Marshall and Kim Field created several of these blasts from the past.

My apologies for the large size of so many of the files. Click on any poster for a larger view. 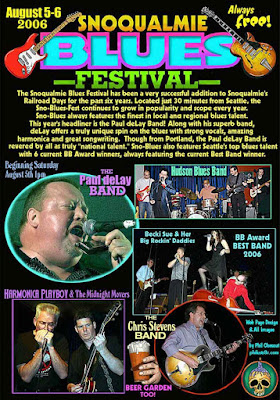 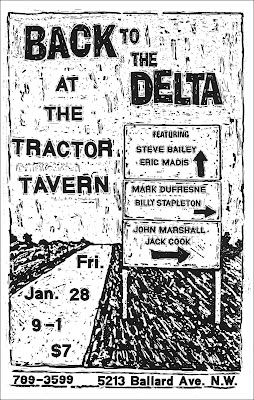 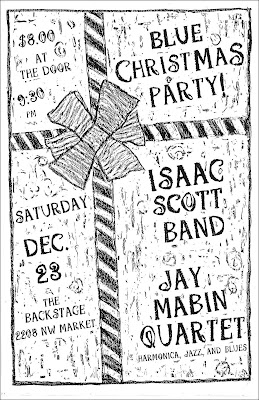 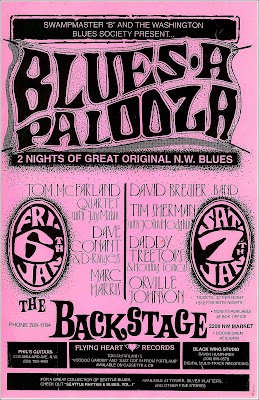 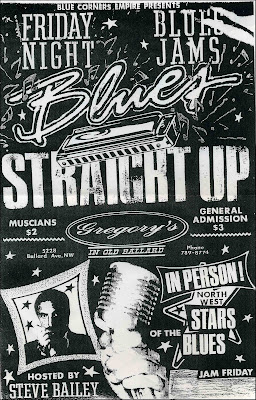 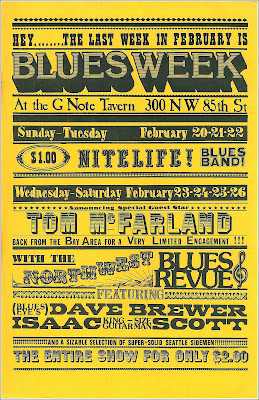 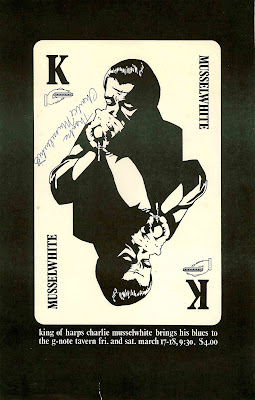 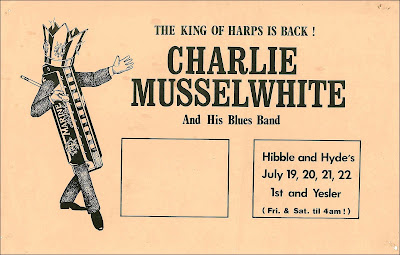 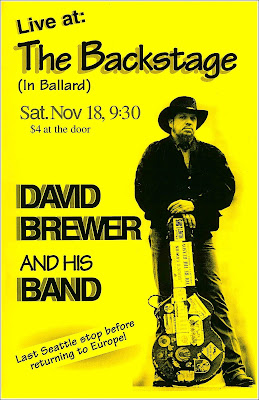 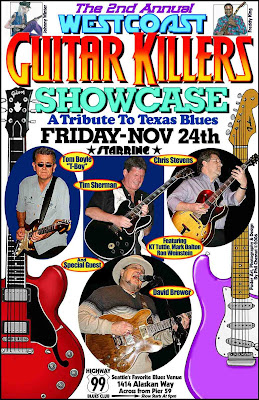 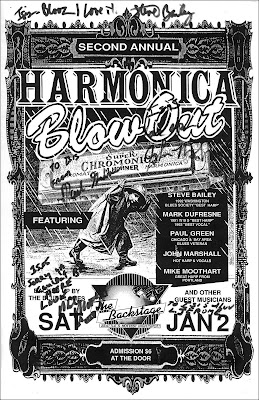 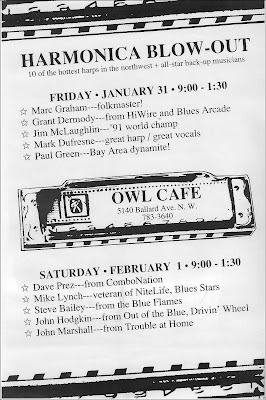 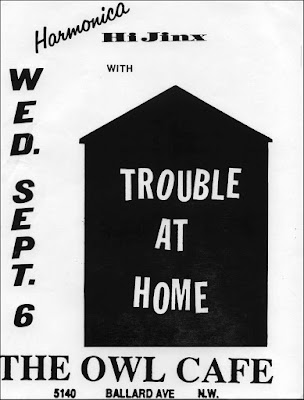 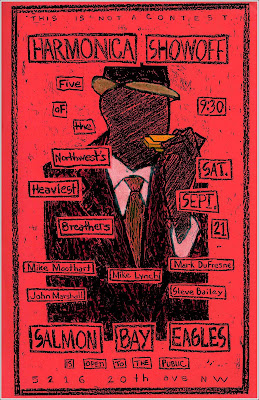 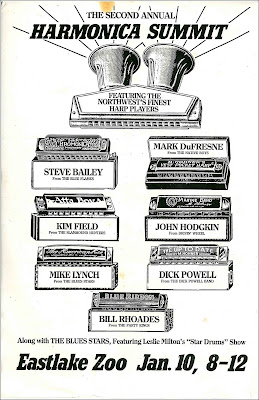 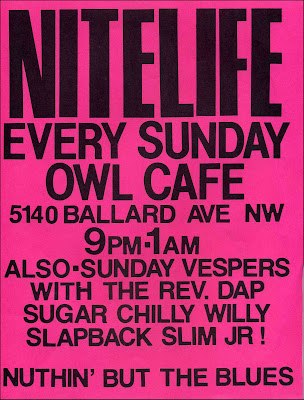 Poster created by Mike Lynch. A fine example of the Ransome Note school of poster art... 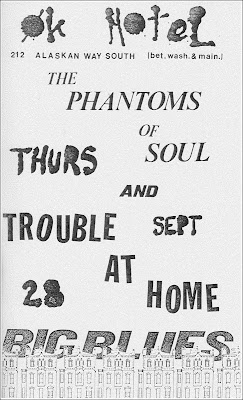 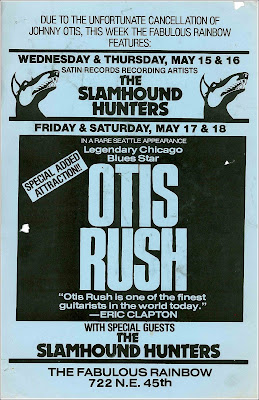 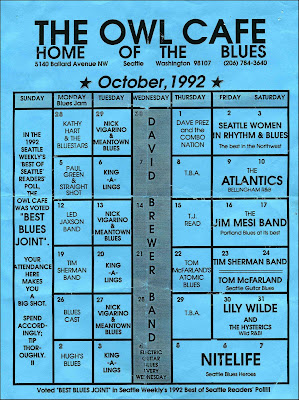 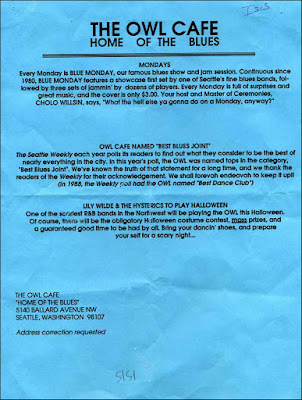 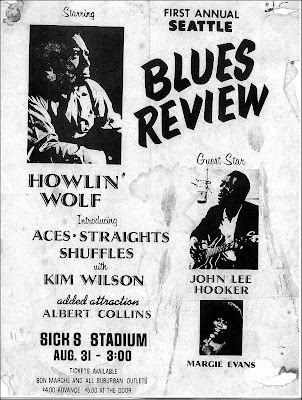 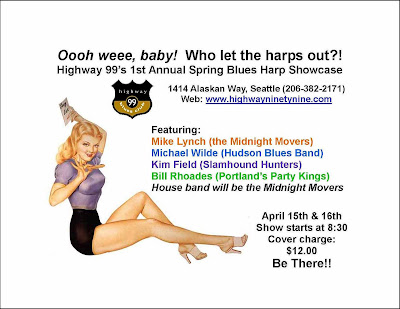 Isaac Scott in Portland
By Rob Shoemaker
(Note: Rob is the bass player in the Norman Sylvester Band)
Sometime around 1983 the old Clinton Street Quarterly published an article by Roberta Penn promoting an Isaac Scott gig at the White Eagle in Portland. The article included the now familiar biographical stuff about Isaac (he claimed Pine Bluff Arkansas as his original home) and quoted Tom McFarland extensively. There was a bit of a buzz about Isaac; he had played at the prestigious San Francisco Blues festival, and he had accompanied Albert Collins both in Seattle and Portland. The show was stupendous. Isaac didn't travel with a band, he used pickup players assembled by John Borroz. Isaac showed that his skills leading an unrehearsed ad-hoc band were just as strong as his guitar playing and singing. The bar was packed wall to wall with a wildly enthusiastic crowd that included just about every serious blues fan in the city. KBOO jazz and blues disc jockey George Page, notoriously hard to impress, held court at a stage-side table all night with the fervor of a new convert in a revival meeting. Isaac returned to the White Eagle again bringing his bass player Tony Thomas, and in the early 80s, following the release of "Big Time Blues Man," got some gigs at Cousin's in Portland that paid well enough that he could bring his whole band. 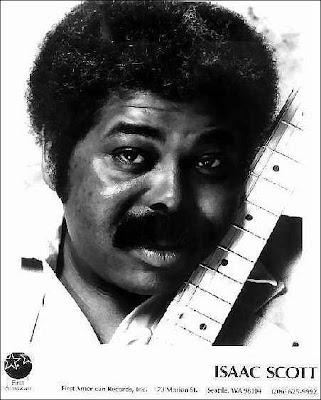 By the mid '80s, the Norman Sylvester Band was working fairly steadily in and around Portland, and Norman invited Isaac to pair up with him at the Key Largo in Portland, and Old Taylor's in Eugene, Oregon. Isaac and Norman had first teamed up as school kids, Isaac sharing his knowledge of church music and Freddie King licks with Norman, who played his first professional jobs with Isaac in 1962. The Taylor's audience was young and wild. Isaac waited out the first set, to come on as the star of the show after a break. Isaac was using a little-bitty cheap amplifier that was dwarfed by Norman's Twin Reverb, but when he started to play, it was LOUD beyond belief. Tremendous tone, a guitar sound that Buddy Guy or Albert Collins would love. Isaac started playing Albert King's "Wrapped Up In Love Again," way faster than the original, liberally adding Freddie King quotes on the guitar, trading solos with Norman, comping so hard behind Norman's playing that all the solos became his own.

The crowd ate it up. It was so loud though, that pianist Janice Scroggins, then as now Portland's first-call blues piano player, stopped playing and frantically started tearing up a paper napkin to fashion herself some home-made earplugs. I was playing bass, and seeing Janice's distress, turned to drummer Ray Nelson, and signaled to tone it down a little. As soon as the volume eased back, Isaac came nose to nose with me and screamed “Doesn't Norman pay you enough to play any louder than that? Back me STRONG, man!” When the next break came around, Dave Dingman, the bar owner, started talking to Isaac, very complimentary, wanting to hire Isaac to bring his own band to Eugene. A few minutes into the discussion, a Mighty Clouds of Joy record started playing on the house sound system, and Isaac faded right out of the business conversation, tipped back his head, closed his eyes and silently mouthed the words to the song.

For the rest of Isaac's life, he and Norman would work together once or twice a year, sometimes in Seattle, sometimes in Portland, including memorable festival performances at Portland's Bite, and the Waterfront Blues Fest. Once, following a night at the Swan in Seattle, Isaac and Wendy invited Norman, his sidemen and their spouses to a home-cooked breakfast the following morning. Big meal, eggs and bacon and biscuits and juice. Gospel music playing on the radio. After the meal, Norman, Isaac and I went to American Music, a frequent part of Isaac's social life. When we returned, our wives were sitting around the living room talking with Wendy, still with the gospel music on the radio. As we went inside, Isaac made a beeline for the stereo and turned the volume up past ordinary people's pain threshold and started grooving to the beat. Wendy just looked up and gave him a little smile, then scooted her chair over close to the other women and drew them all into a tiny circle so the they could hear each other by shouting at the top of their lungs. In Isaac's house, this seemed normal.
Posted by Mike Lynch at 9:51 PM No comments: 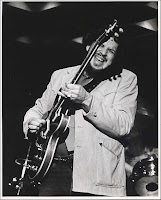 Remember when I told you I was going to put out the CD of Albert (Collins) and I playing on the 4th of July, 1976?

Well I've just finished mastering it. There's about 59 minutes of live Albert, with me on guitar, Darell "Rabbit" Warren on bass, "Boom" Gasper on Hammond B-3, and Les Hutchinson on the drums. It was recorded on 8-track at The Hayloft in Vancouver, Washington, on the bicentennial.

I must say it kicks ass - all I have to do now is get the liner notes done and make up a CD jacket..coolbeans! You can put up a blog about it, and give everybody a heads up that it is coming real soon