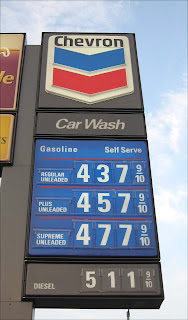 I don't know about you folks, but I'm really feeling the pinch from these rising gas prices. I'm back working full-time, which is great news, but the office is in Auburn, which is a 60 mile round trip from my home in West Seattle, five days a week.

That's 300 miles a week, or a tank of gas. So, at the current prices it is costing me about $240 a month just to drive back and forth to the office. There are no bus or rail lines that come close to the office, so drive I must. Fortunately, there are grocery stores, pharmacies, and even a budget theatre within walking distance of my house. Even the kids' school is only four blocks away, so my car stays parked whenever possible.

This has really affected my willingness to go out and see bands play. I really think about it before driving across town (or farther) to see even my favorite bands play. I can just imagine how gas prices are affecting the cash flow for both bands and nightclubs. Bands' wages haven't changed much since the '70s, but the price of gas has tripled, so the math is pretty simple. And, I can't be the only person that is thinking twice before spending money on a night out at a club, so I'll bet that attendance at shows has to be falling off too. I wonder if we will be seeing more clubs closing because of this?

What do you think? How have rising gas prices, just one aspect of our sagging economy, been a affecting your life?
Posted by Mike Lynch at 8:25 PM 2 comments: 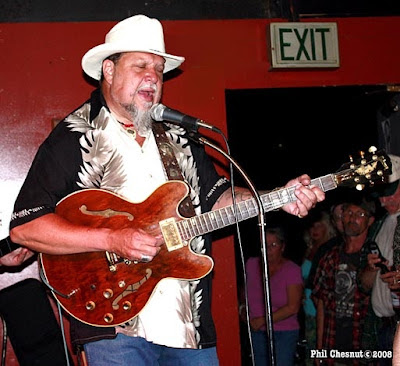 The SBE's longtime house band, "All Stars-No Stripes," set the mood for the night with their own, familiar blues - with Stan Eike fronting on the majority of the vocals, while both Stan and Scotty Lind gave all a dose of their own high energy guitars. It was, however, the mighty tenor sax of Raven Humphres that actually dominated the sets, more than holding his own among the pair of power guitars.

Though not official, I don't feel bad by saying that the second band of the evening, starring the Man of the Hour, could certainly be called the "Intimidators." With veteran Intimidators Bill Freckleton on bass, the horn of Raven, and "Pete the Beat" Langhans righteously filling the drummer spot usually held by Chris Leighton, it looked and sounded like the Intimidators to me. Of course, David Brewer & the Intimidators have been mesmerizing Northwest blues fans for decades, but since Brewer is usually on a European tour this time of year, it made this event all the more extraordinary. 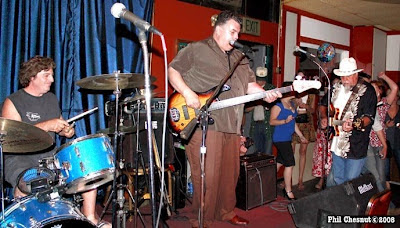 Playing to an appreciative, eager full house, 'til well into the AM hours, Brewer & Co set the room's energy level to an even higher notch. With a pair of sets featuring all of those unique Brewer originals, plus a few new Brewerized cover tunes, this remarkable night of the blues was truly be memorable for all. Sounding like a well rehearsed band, with a ton of shows behind them, Brewer and crew were sharp and on it, contrary to the fact that it was only their second show. With their first show played to a less than savvy crowd at Tacoma's JazzBones, the band was more than appreciative to then play to true fans while laughingly calling the JazzBones gig their rehearsal.

This was also my first chance to get my hands on Brewer's brand new, CD! Going in a different direction on this newest project, The new album is all Brewer and nothin' but. Covering ten blues standards, all with that special Brewer arrangement, David Brewer's "Ghost Dance" is certainly destined for wide recognition and accolades, not only in the Pacific Northwest, but world-wide. Created and produced at Sheri and Raven Humphres' Black Wing Studio, all of the instruments and vocals are rendered, by Brewer himself, and though no credit is given, it's obviously Brewer's pen and ink illustration on the back, tray card.

Though well known in the US and Europe for his power bands, Brewer has recently revised is presentation and now tours solo, making "Ghost Dance" his first album featuring this new side of David Brewer. Long known to be proud of his native heritage, the CD's title is derived from a cherished Native American parable, who's essence is emoted in each and every of these selections. Certainly a landmark album of 21st century American Blues, "Ghost Dance" will be essential to any true blues fan's audio collection.
Posted by Mike Lynch at 7:46 PM No comments: