Ahem...let's talk about the Bluestars, OK?

In my travels throughout the Internet musical wilderness, I have discovered some disinformation associated with my old band, the Bluestars. I dunno why this sticks in my craw, but I'm going to take a minute to set the record straight...

The Bluestars were a rockin' little blues band that played a lot in the Seattle area in the late '80s. The band was a four piece, and consisted of Leslie Milton or Kirk Tuttle on drums, Mark Dalton on bass, Jeff Ziontz on guitar, and yours truly on harp and vocals. Occasionally, other players such as Jack Cook (guitar), John Lee (bass), or Jim Mesi (guitar) would also play with the band. 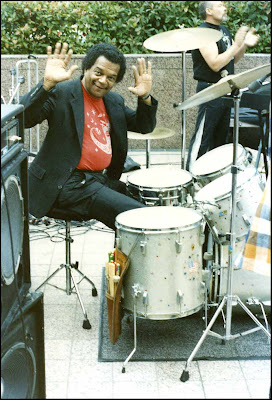 So, the other day I was looking at Kate (formerly Kathy) Hart's web page, and in her bio, she informs us that, shortly after arriving in Seattle from Detroit, she "...put together a band called the Bluestars." Then, on the site's Photo page, there appears this photograph of the "Original Bluestars." 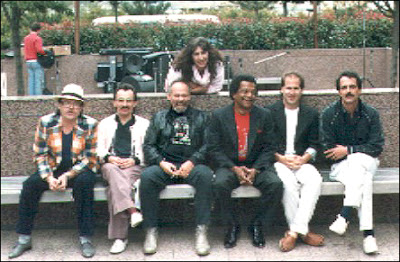 I took this photograph with my trusty Yashica after I finished playing this date (at a Bellevue, WA office plaza) with the band. I don't know why it's so out of focus - a screwed up scan, maybe? Anyway, below is another photograph from my vault created at this same gig, this time by an innocent bystander using my camera again. Hey, there's the missing band member! This was a pick-up gig, and I believe that this might have been the only time that this particular configuration of musicians played with Kathy. 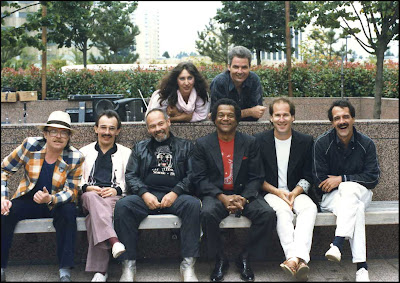 Back: Kathy Hart and Mike Lynch

Here's the 411 on Kathy Hart's relationship with the Bluestars. Kathy had decided that she wanted to focus on doing blues material, and we discussed having the Bluestars back her up on a few gigs. She was the bomb at booking gigs, and it seemed like a good idea at the time (to me, anyway), but immediately after our first gig with her, both Dalton and Ziontz quit the band. If I recall correctly, their spots were filled by Patty Mey and Jim Mesi respectively, and Leslie Milton hung in with us for a while. We played quite a few gigs with Kathy and various other keyboardists, horn players, and drummers, including opening for Roy Orbison at the Bumbershoot festival (he was really short), and the first Seattle Women in Blues show at the Backstage in Ballard. By the way, both of those gigs were total trainwrecks, but the crowds didn't seem to notice. Go figure.

I eventually decided to call it quits on the gig with Kathy, and we agreed that she could continue to use the Bluestars band name. Various versions of her "Bluestars" band soldiered on until she finally moved back to Detroit.

Unfortunately, I don't have any more photos of the real "original Bluestars" (all together, anyway), but I do have a few more of the AKH (After Kathy Hart) versions of the band, including this one that I took at the West Seattle Street Fair. That's my Fender amp next to Patty Mey. Speaking of Jim Mesi - the last time I cruised by his web site, I noticed this link on the News page to an article written about Jim by Greg Johnson for the Cascade Blues Association's Blues Notes. In this article, we're told that, during Jim's stay in Seattle in the late '80s, he fronted his own band called Little Jimmy & the Blues Stars.

Krikey!!! Jim played with the Bluestars many times, both with and without Kathy Hart, but I don't recall him ever fronting his own band in Seattle, by that or any other name. Someone correct me if I'm wrong about this, please?

OK, I feel better now. Thanks, I needed that...

Come to think of it, Jim Mesi did play a few times in Seattle with Rockin' Rick (at the Owl Cafe), but wasn't that the Rockin' Rick Band?

The Bluestars in its heyday (Lynch, Ziontz, Dalton, K.T. and then Leslie Milton for a long stretch) was a compact, tasty little band with a great repetoire of Harmonica Playboy classics (some of them still heard today when Mike performs), as well as several of Jeff Ziontz' impeccable guitar instrumentals and occasional uproarious Stardrums vocals. This band played often, and put on a tight, entertaining show around the Puget Sound, with occasional evenings of real musical brilliance. We were practically a house band at the Old Timers Cafe in Pioneer Square, owned by the notorious Juan and with his beautiful sister tending to the crowd on particularly fortunate nights. Back in those days the Blues owned downtown Seattle nightlife in a way that seems like a beautiful dream compared to the scramble for gigs we are all experiencing today. Good times. I could never understand Mike's attachment to Kathy (now Kate) Hart - I would rather have been boiled in oil than be in a band with her, but there were a lot of people making strange decisions back in the latter days of the 80's! I have some nice tapes of the original band, and they remind me that this was as good a band as I remembered it being! Thanks for the memories, Mike!

Ah yes, the late '80s and early '90s were vintage bad decision years for me, but I have decided to change my ways! I am going to start out by taking some vocal lessons from an old pro: http://www.katehartblues.com/vocal_instruction.htm

Some where it is documented in a Bluesletter that in 1991 Kathy Hart & Bluestar won a BB for Best Band.

Hey Mike. You have a memory like a steal trap and I believe every word you say on this subject. You're the biggest Blues Star of 'em all! I was in the audience for many of your shows during this time period, and it was always the blues, the whole blues, and nuthin' bit the blues, baby.... so help us blues.
T-Boy

Interesting to be the topic of something so long ago.

First of all, I don't write the press release or information on my website, my publicist (of long ago) did that. I know exactly how I got in the band who was in it and how I ended up with it. It was actually one of the better experiences of my musical history in Seattle. I did not start the band and if anyone ever asked me, I told them the truth. It was such a small detail that I didn't really think much of it. My mistake.

Working with Mike Lynch was an absolute joy. There is no nicer person and in my opinion, one of the most knowledgable when it came to the blues. He taught me more than I can ever say. Having said this, it was a very difficult time in my life. I was at the end of my drinking and drugging, going through a divorce and really felt like I was going to have a nervous breakdown. But through it all, I tried to keep the band working as I felt it was my responsibility in being useful to the group, and I did try and keep a happy face. Being in the Bluestars was such a great "musical" time, and no matter who says what, I will continue to think of being with all of the musicians as an incredible experience. I am so sorry there are sour grapes and am surprised because it was such a long time ago.

I am now retired from performing after 40 years. Retired on a high note playing festivals and large crowds but was extremely tired. I have studied voice for the last ten years and went to teaching it full time. I have over 60 voice students who range from kids to people in Kid Rock's band. I just released a new record of original music to very nice reviews and will continue to write and record.

My husband and I have been married for over 15 years and live about an hour from Detroit on Harsen's Island. Lake Saint Clair is our front yard. It opens to two of the great lakes so we watch huge ships go by. It is really something special.

I do want to say thank you Mike Lynch and all who helped to shape my musical DNA. I will never forget you or the experience.

LOL. Anyone who is brave enough to tell the truth (THANK YOU, Tall Cool One!). Most of us learned our lessons the hard way about being in a band w/Kathy H.. and will tell you that Kathy Hart and Jim Mesi were and are Class A Liars, so most of the "sketchy" info about who played with who and for how long is just that... sketchy at best, and coming from 2 people with mostly selective memory and a penchant for outright falsehoods conjured up to make themselves look good or better than they are/were. Take K. Hart.... somebody PLEASE! Just calling herself a singer is the first lie, and the rest is history! Mesi would throw his best "friend" under a bus for a line of coke and a blowjob. Hart would sell her band members "shorted" tiny bindles of crappy, stomped-on product so that she didn't have to pay anyone. Two of the worst "actors" in the old music scene. At least Mesi could play decent guitar! I guess that made up for his umpteen personality/character flaws....