The twins and I went down to the Pacific Place mall in downtown Seattle on "Black Friday" night to see Eric "Two Scoops" Moore and his band. Getting there was a total hassle because of the crowds of shoppers, and several streets in the area were closed for thousands of other folks who were apparently waiting to see a Christmas tree being lit up in the Westlake Center area.

The band was set up in the lobby and was rocking the joint when we arrived. The band members included Two Scoops on piano and vocals, Hank Witherspoon on saxes and vocals, Guy Quintino on acoustic bass, and Cutts Peasley on drums. Two Scoops was his usual irrepressible self, and my boys got a kick out of it when he played their favorite song "Big Buffet."

This was a two hour show, but we split after the first set - the lobby was getting way too crowded, and there was no place to sit. Believe it or not, this was the first time for me to see the Two Scoops Combo, but I hope to see them again soon. On our way back to West Seattle, we drove through the Pioneer Square neighborhood, which looked like a ghost town compared to the downtown area. Not good, since this is the nightclub part of town! 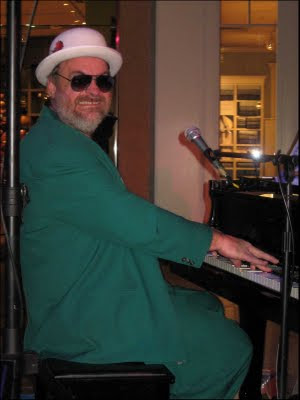 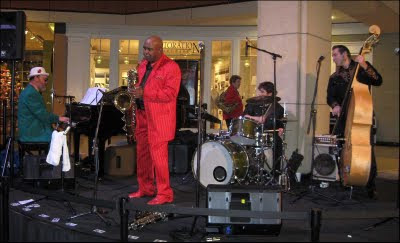 Hey Mike,
Thanks for the review. You're a trooper. Battling the crowds and nursing the worst cough of 2009. Holy Cow! I'm glad you're cured.
Guy

You're welcome, Guy. I gotta get out to see Two Scoops again soon.